Punching Worry In The Face – Day 3 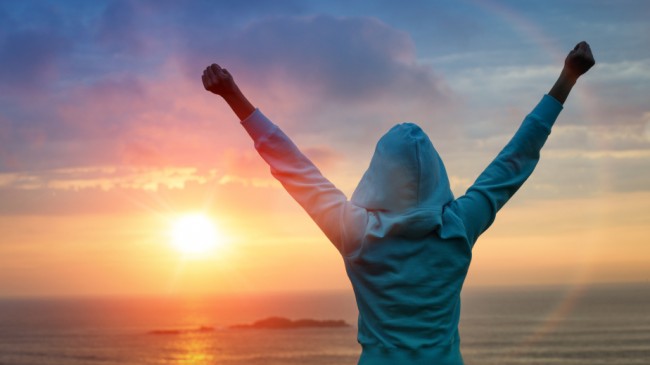 Punching Worry In The Face-Day 3

It’s day three of punching worry in the face.

How are you doing?

Have you checked out Day 1 and Day 2?

This is about taking small but significant steps towards our goal of beating back worry and living more in the moment, bringing our best game and making room to DREAM bigger, THINK better and DO more of the things we’re put on the planet to do.  Amen?

Yesterday, we asked ourselves about what we can put in our “Control” bucket.

Today… we’re going to give some thought to those remaining two buckets.

The “INFLUENCE” bucket and the “LET IT GO” bucket. 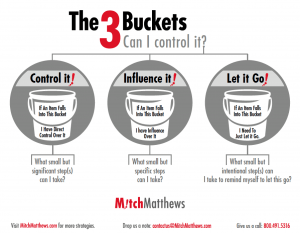 As you think about those buckets… what are a few things that could go in each?

As I mentioned in my podcast, I had to apply the 3 buckets to the launch of the podcast itself.

Could I influence those things?  Sure.

I could try to influence things by bringing my best game, by reaching out and asking for help and by surrounding myself with good people to help me to pull it off.  But in the end, I had to “let it go” with the actual results.  Yup.  I just had to let it fly.  (Although in the past it was the things that needed to go in the “let it go” bucket that stopped me in my tracks!  Amen?)

The 3 buckets and parenting.

The list of things that can go in your “control” bucket is relatively short.  Sure… when the kiddos are younger, you can “control” their schedule, their TV time or when they go to bed.  BUT as they get older, the list of things you can actually control gets shorter and shorter.

BUT it’s more about what goes into the “Influence” bucket and the “Let it Go” bucket.

I’ll never forget when I walked a group of executives through the 3 buckets concept in some leadership training I was facilitating.  Initially we’d talked about applying the 3 buckets to management, but then the conversation turned to families and relationships.  At the break a well-dressed executive approached me.  She said, “Okay, I have to admit something.”  I replied, “What’s that?”  She continued, “As much as I hate to say it, I realize now that I need to put my teenage son’s hair in the “Let It Go” bucket.”  I didn’t say anything but I know I smiled and my eyebrows rose which must have signaled that I understood.

She said, “It’s not really even a big deal. It’s just something that got under my skin and it’s caused some division.  I’m guessing the minute I ‘let it go,’ it will probably deescalate the whole thing anyway.”

Again, I didn’t say anything.  I just listened.

She didn’t wait for a response from me.  She just turned and walked away.

I smiled as I envisioned the surprise her son’s face that night as he heard about his mom’s decision to “let it go.”

Obviously, these three buckets can also apply to how and where we lead.

Now, does this mean that we need to “let go” of excellence?  Does it mean we need to give up on delivering great work?  Nope.  It doesn’t.  BUT these buckets can help to keep things in perspective.

For example, we do a lot of work with organizations with infusing more of a coaching and mentoring approach in their leadership DNA.  We give leaders strategies for drawing out people’s best work by cultivating more autonomy and engagement.  It can be AMAZING to see what can happen within a team when a leader really coaches their team members to be at their best.

BUT honestly, it can also be a little “offensive.”

Well the 3 buckets help to explain why.

Let me give you an example.

Often a manager will want to coach a team member to tackle a new project.  Through coaching and mentoring that person, the leader can encourage them to try some new things.  So the leader is CONTROLLING their own approach and being intentional about coaching the person.  Within that they try to give the person some autonomy to really run with it.

BUT then it happens.

As the team member starts to spread their wings and fly with the project, they start to do something differently than the manager would have done it.  (Ever felt that?  Yeah me too.)  That’s when the leader has to decide… what to control, what to influence and what to let go.

I’ll never forget a situation when this happened to me.  I was working with one of my own team members.  I was wanting to give him more autonomy and inspire him to take more ownership over a project.  Things were going well, but then when I asked for an update on the project he informed me of the direction he wanted to take.  Immediately his new direction “pinged” me, because it wasn’t the way I would have done it.  But before I shut him down, I quickly thought of the 3 buckets.  I remembered that this was a relatively low risk project and even if it didn’t go well, (AKA: The project crashed and burned a horrible death) it wouldn’t have much of an impact.  Plus, I thought that if it didn’t go well, that would be a good lesson for this team member too.  So I “controlled” my response.  I chose to “influence” the project by offering a few quick thoughts, but then I “let go” of the approach and let him run with it.

Not only did the project work out… but it was a break through success!  (Yeah… THAT was kind of offensive!!!)

BUT, because I “let go” of his approach, he surpassed the results we were trying to achieve.  He also uncovered a new way to approach this problem that I’d been blind to.  AND this team member felt more empowered and more capable when the next project came around.

So I was REALLY glad I’d “let it go” on his approach.

So… how about you?

I’d love for you to take two to three minutes to think about a few things that you want to be intentional about “Influencing.”

Then take two to three minutes to write down a few things that you want to be intentional about “letting go.”  (Is it a co-worker’s attitude, the weather, the results of that test, your kid’s choice of hair color?)

Think about it and write some down.

Okay… let’s do this!

PS – Did you know you could win a FREE copy of my book IGNITE or even a “DREAM.TH1NK.DO.” Coaching Package with me?

Just leave a review for the DREAM.THINK.DO. podcast on itunes!  Click here to find out more.