Is this your LEAP year? 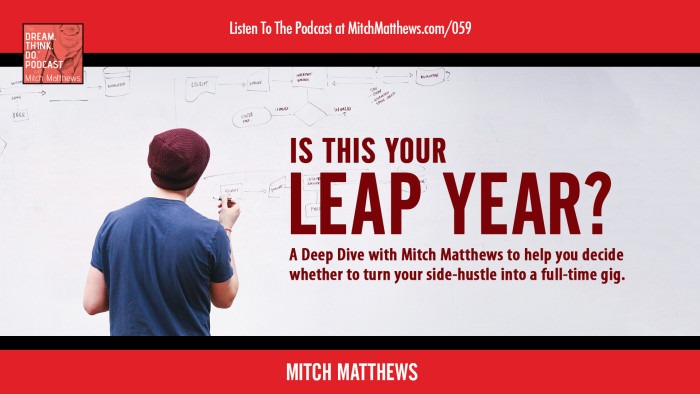 31 Dec Is this your LEAP year?

In this episode of the DREAM. THINK. DO. podcast deep dive to help you to decide whether to turn your side-hustle into your full-time gig to know Is this your LEAP year?

Yes… 2016 is an official leap year. So that means February has an extra day in it. But that’s NOT what I’m talking about when I ask YOU whether this is YOUR “Leap Year.”

What I’m talking about is whether this is the year that you turn your “side-hustle” into a full-time job.

I was asked a question by a long-time DREAM.THINK.DO. listener who’s trying to decide whether to “LEAP” and make her catering hobby… her full-time jobby? (Sorry. I couldn’t resist the rhyme.)

Do you have a passion that you’d like to make your career?

Do you have a side hustle you’d love to make your full-time deal?

Do you wonder if you could make it work?

Do you wonder when you should take the “leap?”

Whether this IS your year… or not, this episode will help you to focus on the right things and make that decision with freakish levels of confidence and boldness!

For the FREE Leap Number Equation worksheet, text dreamthinkdo to 33444 and get the information you need to make your decision to leap into 2016.

[Tweet ““I believe in taking small, but significant steps of faith.””]