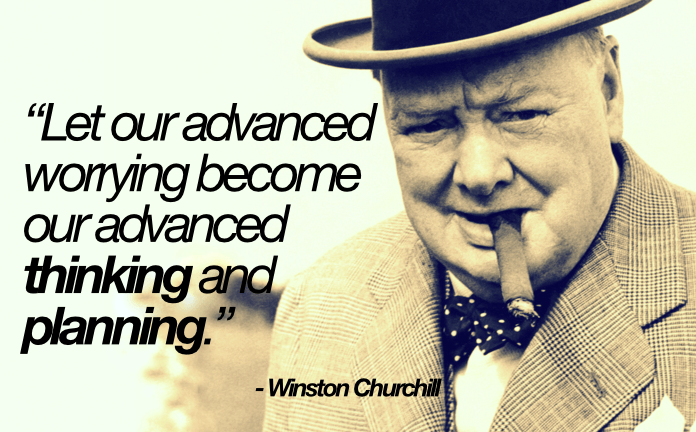 Since we’ve been talking about beating back fear and smacking worry right in the face… today’s strategy might surprise you!

This past weekend I gave a keynote presentation on worry to 300+ college students.  We had a lot of fun exploring how worry can sneak in and zap our ability to focus, bring our best game and enjoy life.  This audience was particularly receptive because they’re members of the most stressed-out generation in our country’s history.

After my session, a “recovering worrier” approached me to say thank you, but I could also tell she had a question.  We chatted for a minute, and then I said, “It seems like you’d like to ask me something.”

She smiled and said, “Okay, I’m a life-long worrier.  I want to get better and I’m going to use some of the strategies you talked about today to punch fear in the face.”  Then she stopped, took a breath and continued, “But it seems like worrying helps me sometimes.  It helps me to think through things and avoid some bad stuff sometimes.  What about that?”

I said, “Oh I LOVE that question.  However, I want to offer you some different language to use there.  In those situations, I think you’re ‘strategic worrying” instead of worrying.  In the corporate world, they call it “Scenario Planning.”  And I think that’s an exceedingly wise thing to do!”

Her eyebrows rose.  She gave me a quizzical smile.  Then she said, “I like the sounds of that but what are we talking about?”

I then explained a strategy that I want to share with you today.

Maybe you’ve heard of it.

For example, companies use scenario planning to think through how they would handle different situations that could play out in the future.

In some ways, it’s “boundaried worrying.”

Scenario planning is a strategic planning method that some organizations use to proactively think through and plan for various plausible situations (both negative or positive) that could happen in the future.  In short, they think through potential bad (or good) stuff before it happens… and then plan for it so they can either smack it, whack it, avoid it or benefit from it.

For a specific amount of time, a specific group of people thinks through strategies that could be used if a specific situation ever presented itself.

“Okay,” you might be saying, “That sounds appropriate for BP or NIKE, but how do I do THAT?”

Think about it.  If you’re already a bit of a worrier, you’ve been working that “creative muscle” in your brain to think about about all of the terrible things that could play out.  Right?  Isn’t that what we do when we worry?  We visualize (either consciously or subconsciously) the various ways a situation could go bad.  Then we play those scenarios over and over in our minds until our hearts are racing, our minds are spinning and are palms are sweating.  (Amen?)

Well, in a way, “scenario planning” allows us to take that creativity and point it at something more positive and a lot more productive!

With scenario planning, you can think through some of those things that could go wrong.  But instead of losing the rest of the day to worry… you take some of that creativity to make a plan to avoid those potential negative outcomes!

Or as the late great leader, Winston Churchill once said,

There are 3 keys for a Recovering Worrier to use Scenario Planning.

1: Get focused on the PROBLEM

If you find yourself worrying, ask yourself, “Okay… what am I actually worrying about?  Is it worth devoting some time to?”

If you can narrow your focus to something specific and it’s worth spending some time on… then move to step 2.
If not… toss it into the “Let it Go” bucket and move on!

For example, I was once working with a group of city leaders.  They had brought me in to help them think bigger and navigate some potential challenges.  I asked the group, “What’s something you could be worried about right now?”  One of the leaders brought up a large outdoor festival they threw every summer.  He said he would just get completely stressed leading up to the event, because he was constantly worried about the weather.  I said, “Oh that’s a great example.  Let’s talk about the various things we could do to navigate bad weather.”  So then we moved onto the next step.

2: Get focused on taking ACTION

When we worry, we can be consumed with negative scenarios and they can shut us down.  All those possible nasty outcomes can stop us in our tracks.  Right?

When we scenario plan, we acknowledge some bad things can happen.  But we don’t stop there.  We think about things we can do to handle or avoid those potential situations.

In this step, instead of just pointing your creativity towards the various ways things could go bad… you think about solutions.  You move past just ruminating on the problem and you start to think about who you could avoid it, head it off at the pass or even benefit from it.

You think about the ways you could take action!

In the case of the city leaders, we brainstormed through some things they could do if there was a storm.  We talked about alternative locations.  As we did we talked about how reaching out and exploring these “back up plans” could involve other leaders and get the word out about the event.  We even discussed that thinking through and planning out some options could help to build even more of a sense of collaboration within the community leading up to the event.

We had a good healthy conversation and specific tasks were assigned to specific individuals.  The conversation could have lasted for hours, but because step 3 was in place… it only took 30 minutes.

I love planning.  Maybe you do too.  BUT… too much planning can lead to analysis paralysis.  That’s especially true for “scenario planning.”  As ninja-level recovering worriers, we know our brains can spend hours worrying if left unchecked.

So the final key is to put a time limit on your scenario planning.  Use the clock to boundary your “strategic worrying.”

One of my favorite questions helps to simplify this step.

When I get hit by a temptation to worry, I ask myself, “What could I do about this in the next 30 minutes?”

A recent example of this was, I recently struck with the temptation to worry about an interview I was conducting for my DREAM. THINK. DO. podcast.  I was excited about the interview, but I also really wanted to nail it.  So I was tempted to think through the various things that could go wrong.  Everything from a tech glitch… to a botched question… to me getting sick right before the interview.  (Hey… I’m a recovering worrier!  I can go from 0 to 60 on the worry scale if I let myself!)  But instead of running down “worry road,” I stopped and asked myself, “What can I do in the next 30 minutes to prep?”  I set the timer on my phone.  I got hit with a few ideas.  I went to work.  Then, when the buzzer went off… I shut it down and walked away.  It felt good.  And guess what.  The interview went great!  Was it perfect?  Nope.  But one of the things I’d thought through in my “Strategic Worry” session helped me to avoid a snag during the interview.  So it was time well spent!

Where could you apply some “Strategic Worrying?”  Where could you try some scenario planning?  Give it a try, comment below and let us know how it worked for you.