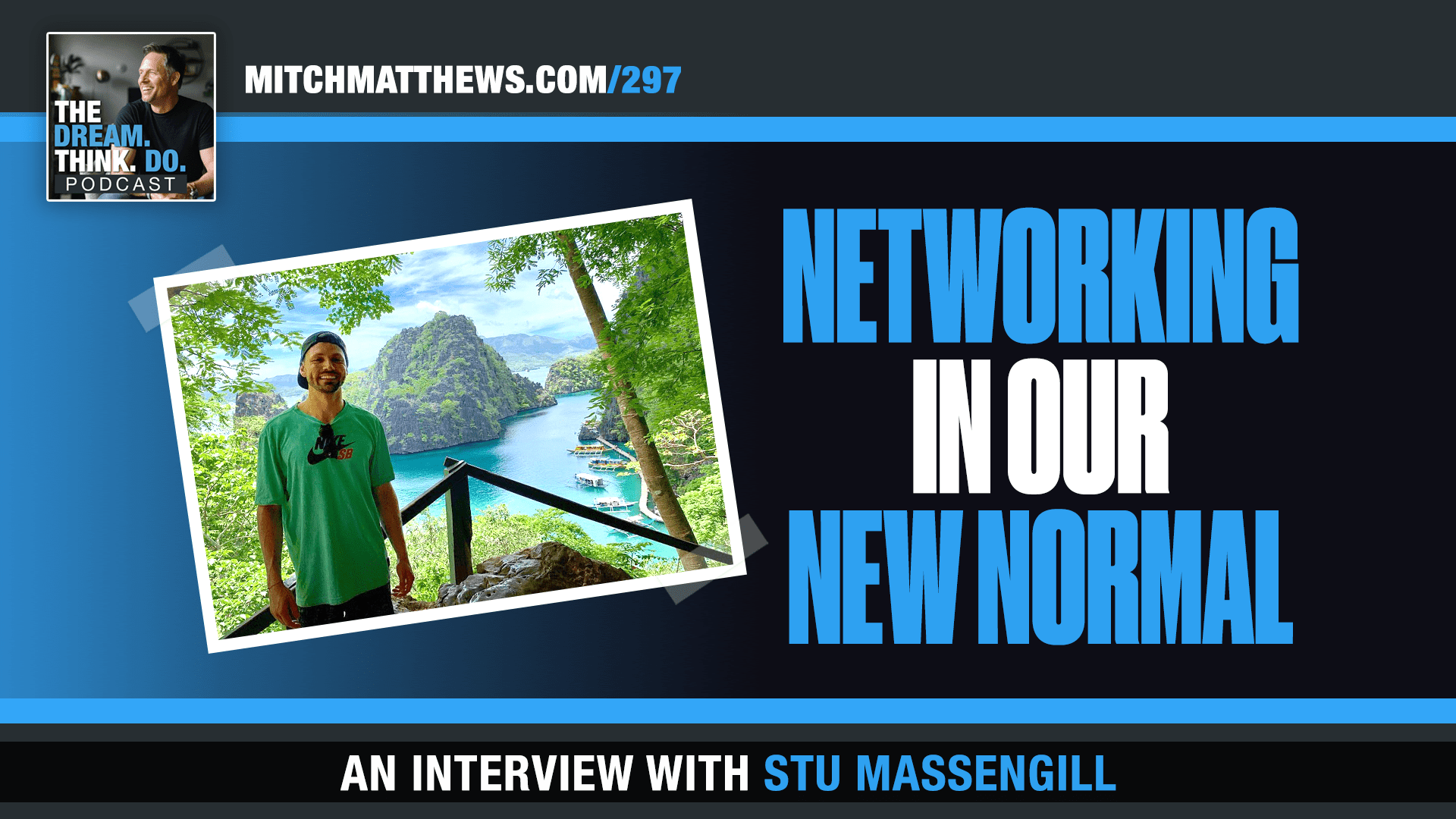 Stu Massengill is a speaker and podcaster.  He’s helping Millennial and Gen Z high achievers to communicate and connect at new levels.  Surprisingly, he started his career as a shy kid whose biggest fear was public speaking.  But after pushing himself to speak more… he slowly fell in love with it. And he started to build a network that changed everything.

Since then, Stu has been on stages around the country. Speaking to anywhere from 10 to 10,000… where he talks about the importance of improved communication and exceptional networking skills.  As you’ll hear in the conversation, Stu Massengill has some powerful and practical strategies for connecting with people and growing your network… EVEN in a pandemic.  I think you’re going to love it… so let’s get to it!

MORE ABOUT THE STU MASSENGILL EPISODE:

Hello and welcome to episode 297 of DREAM THINK DO.

Today… we’re talking about a wildly important subject… but it’s one that you might not have been thinking about for a while.  And that is: networking and meeting new people.

That’s right… Networking and connecting even during a pandemic!

As you well know… growing your network of amazing people is critical.

In fact, friend and frequent Dream Think Do guest, Bob Burg (mitchmatthews.com/268/)  is known for saying:

“The single greatest “people skill” is a highly developed

& authentic interest in the *other* person.”

“The richest people in the world look for and build networks,

everyone else looks for work. Marinate on that for a minute.”

“Networking is the No. 1 unwritten rule of success in business.”

Plus, like we’ve talked about in previous episodes of DREAM THINK DO… the best time to build your network is when you don’t need it.  That’s so you can lean on it… especially when life throws you a curveball… and you need some help!

So yes… networking is critical… building relationships is essential.  HOWEVER… we need to talk about the elephant in the room. #suckitcovid.

TRUTH: But just because it’s tougher to do… doesn’t mean we shouldn’t be doing it!

And heck… if you are doing it now… that’s just one more thing you can be doing to set yourself apart!!!

Our guest, Stu Massengill is a speaker and podcaster who’s helping the world… especially our younger generations… to network and connect.  It may or may not surprise you… but he started out as a shy kid whose biggest fear was public speaking and meeting new people.

But after pushing through his fears and learning some of the strategies we’re talking about, he slowly fell in love with both. And these strategies allowed him to build a network that changed everything.  He started to meet his heroes.

People like Action Sports Moguls Rob and Bryianna Dyrdeck, Olympic Gold Medalist Shaun White, and Best Selling Author and international speaker, Tony Robbins.  Heck, his relationship with Tony grew and so now they’re friends and Stu gets to speak on stage with Tony at events around the country.

Plus, all of this inspired him to launch his own podcast called “Finding Direction,” which helps millennials and Gen Zers to find direction.  And that is how we connected… because Stu Massengill invited me to be on his show.  We had sooooo much fun… I wanted to turn the mics around to get more of HIS story… and share his insights and strategies with YOU!

But that’s what good connecting and networking does… right?  It builds relationships and it inspires people to help each other out… and share the good stuff.  So let’s get to the specifics.

What did you think?  What’s a strategy you’re going to use?  More importantly… join in the conversation.

Do you think it’s important to still be networking and growing new and deeper relationships during this pandemic?  If so… what’s one of YOUR favorite strategies to be using right now?

If not, let us know why.  I can’t wait to hear from YOU!  Leave a comment below and let’s TALK!