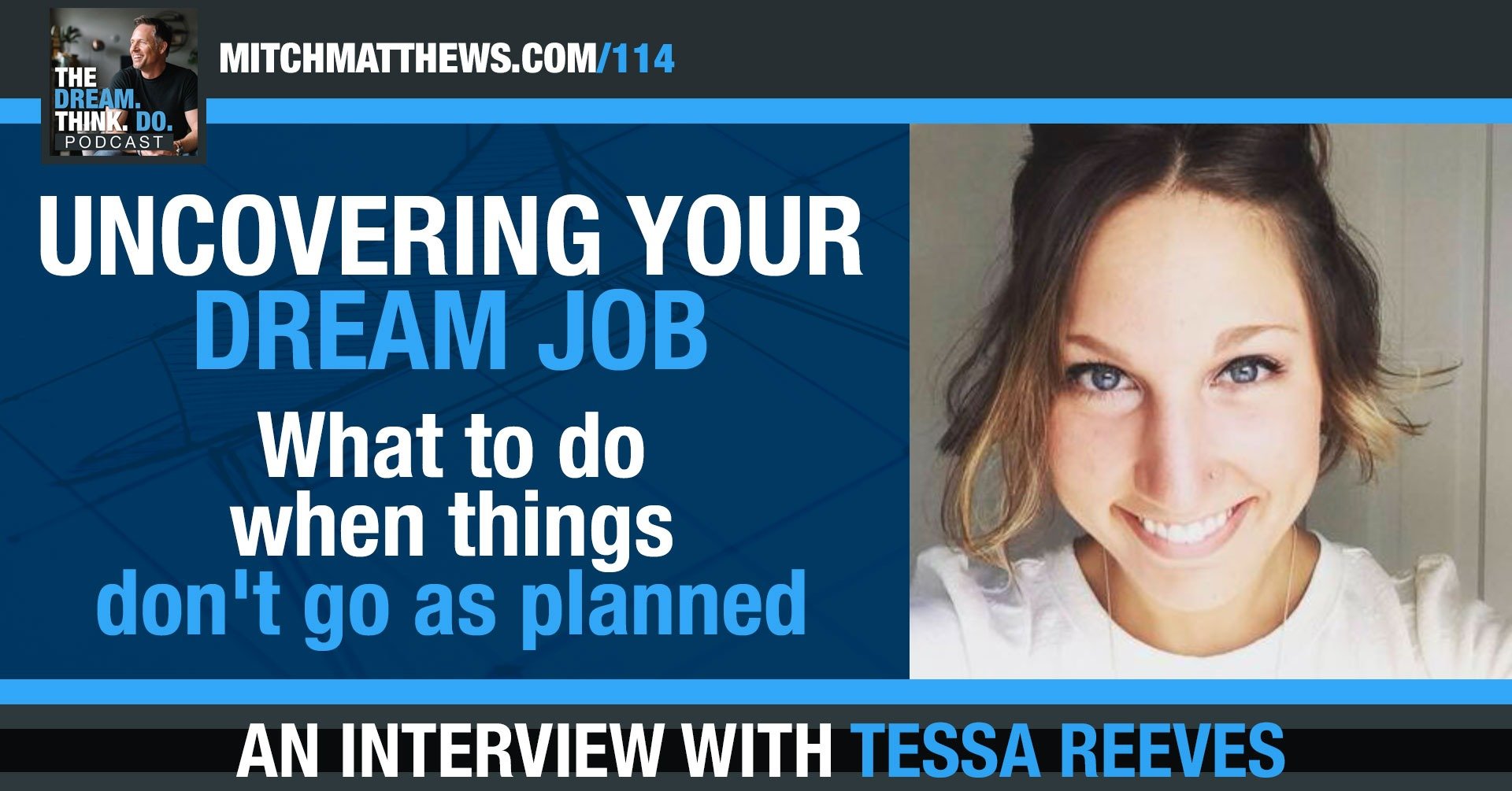 Mitch interviews Neighbors Apparel Founder – Tessa Reeves. In the interview, they discuss how Tessa had thought she scored her dream job in New York City. But in a short time, she figured out it was a bad fit and she had to start all over. So through a series of experiments, she was able to uncover a career that she was passionate about. And to Tessa’s surprise… it was right in her backyard.

What happens when the job you think will be your dream job… turns out to be a bad fit?

That’s what happened with my DREAM THINK DO podcast guest, Tessa Reeves.

She scored her dream position with Vogue Magazine in New York City.

But within weeks, she started to realize that it wasn’t what she thought.

She started from scratch to find a “great fit” career.

After a series of intentional experiments… she found it.

Surprisingly… it was in her own backyard.

Here’s a video interview with Tessa too from when we brought the BIG Dream Gathering to Kent State University:

If you’ve ever found yourself in a “bad fit” job, you’re going to want to hear Tessa’s story.

Plus, you’re going to want to hear the specific steps she took to launch a career she now loves.

Enjoy and interview and be sure to comment below on something that stood out to you from Tessa’s story.  I’d love to hear from YOU!

Here are the show notes from today’s DREAM THINK DO Episode:

Sometimes that great job or career you always imagined is truly perfect. For someone else, that is. Not for you. When that happens, do you keep trying, hoping that one day you will settle into this awkward, new space, or do you go in search of something that fits not only your creative heart, but your spirit as well? Tessa Reeves found herself in this situation and decided to pivot and find meaningful work that encompassed all of who she is. This Kent State grad shares the story of moving from her parents’ Akron, Ohio home to New York City for a glamorous job at Vogue Magazine, and moving back home to find that her perfect fit was unexpectedly right in her own backyard.

New York City Dreaming
Tessa Reeves has always been a big dreamer, and one of her longest-held dreams was to work in the New York City fashion industry. Before she even finished her final year at college, she landed an internship with Vogue Magazine and moved from Akron to New York City. The first week, everything was new and she felt both nervous and excited. But after a couple of weeks, everything seemed mundane. No one seemed enthusiastic about what they were doing, and they worked excessively long hours. Reeves began to see it as working for materialism and celebrity, with no substance behind it. “What am I really doing here, or giving my life to,” she asked herself, “if this is the kind of career I’m starting?” Certain she was in the wrong place, within three weeks Reeves resigned, and returned home to Akron.

What’s Next?
“Everyone in my life was cheering me on from afar, and I was apprehensive to tell people that I quit.” Her friends in the industry who coveted an opportunity like she had with Vogue, thought she had gone mad. Even her sister asked if she was okay. It was what she had always dreamed of, and here she was turning her back on it. All Reeves knew was that if she stayed in a job like that, and looked back on it forty years later, she would feel empty and full of regret.

Flirting and Fumbling with Volunteerism
Even though she knew she was not enamored with the idea of fashion anymore, Reeves did the sensible thing, stayed with it, and completed her fashion degree. In her senior year, she got into volunteering, thinking it was a good way to figure out just what she wanted to do. The first thing she tried was working with therapy horses at a farm that helped special needs kids. Volunteers were to groom and brush the horses. She had always loved riding horses as a child so it seemed like a good fit. She learned in one day that it was not for her, and checked that one off the list.

From there, she looked into inner-city organizations that her church partnered with. There were a variety of jobs, from hanging out with preschoolers to working with teens. She dabbled in everything. This experience taught her a lot about herself, like what she enjoyed, and what her strengths were. When she got up and talked in front of a group of people, she was surprised to find that she enjoyed it. She also found out that she didn’t like working with preschoolers. No doubt they were adorable, but far too many runny noses for her liking.

Many refugee families are served from Akron. Reeves never realized, until she began volunteering, that there even were refugees in Akron. Once she heard their stories, her interest grew, and she could see herself really digging into the refugee cause.

When Two Dreams Collide, It’s Still Hard Work
“This is one of the craziest, coolest parts of my story, because it wasn’t what I was seeking, and fashion was still totally off my radar. It was only about six months in that I realized I’d like to make a career out of helping refugees,” explains Reeves. “I told them at the center that I had my fashion degree and wanted some kind of work in the refugee community.”

It didn’t take long to come up with an idea to use her training and ability. Reeves had a degree in fashion and the refugee women knew how to sew. The Refugee Center approached her with an idea: “What would you think if we gave you some seed money so you can create a program for these women using their sewing skills? You’ll be giving them the opportunity to create products, earn an income, and gain confidence.”

It was time to digest some hard facts. By accepting the challenge, she was postponing any stability or career. She took low-paying odd jobs so she could grind away at her business on the side. “It was the price I had to pay, to do this,” she says simply. The organization provided the upfront funds to begin the business, and the space out of which to operate, but that was it. She had no clue how to actually run a business, so she researched, watched Youtube videos, and read Dummies books to figure it all out. She learned as she went along, and Neighbors Apparel came to life.

Confidence and Courage
Having to face new challenges every day caused Reeves to see herself in a different light. “I was kind of watching myself coming out of my shell, and being extroverted and confident in who I am.” When she first began, she knew she had to network and get out there, get up and give pitches and presentations, and tours of her shop, but it wasn’t easy for her. But that has all changed. “Now it’s become my joy to share my story and my mission. Before it made me want to crawl under the covers.”

Words of Wisdom
Her words of wisdom for those just starting out? “If they are still finding it, and they are not sure what it is yet, just start with something you want to do, like going to an event in the city, or going for coffee with someone who is just an acquaintance. Tell them you’d love to hear more of their story. Otherwise you won’t be putting yourself out there. You won’t be meeting anyone new, or doing anything different.”

Expansion and New Business Models
“What’s next? We just brought a real designer to our team. She went to school for it, and I’m paying her, and we’re hoping to launch our new collection. Look for it in the spring. I’m trying out some new business models, too. Instead of a huge factory with everyone in one place, I’ve contacted some non-profits who teach refugee women to sew.” Reeves hopes to help refugee women elsewhere by having them work in their own Ohio cities. Her plan is to partner with existing places around Ohio, for now. Eventually, she would love to be able to help women across the nation, as their products become a big fashion brand.

Contact
Read the Neighbors Apparel story, find their social media links, and check out some sneak peeks into their new collection: Website.