The road to big dreams… 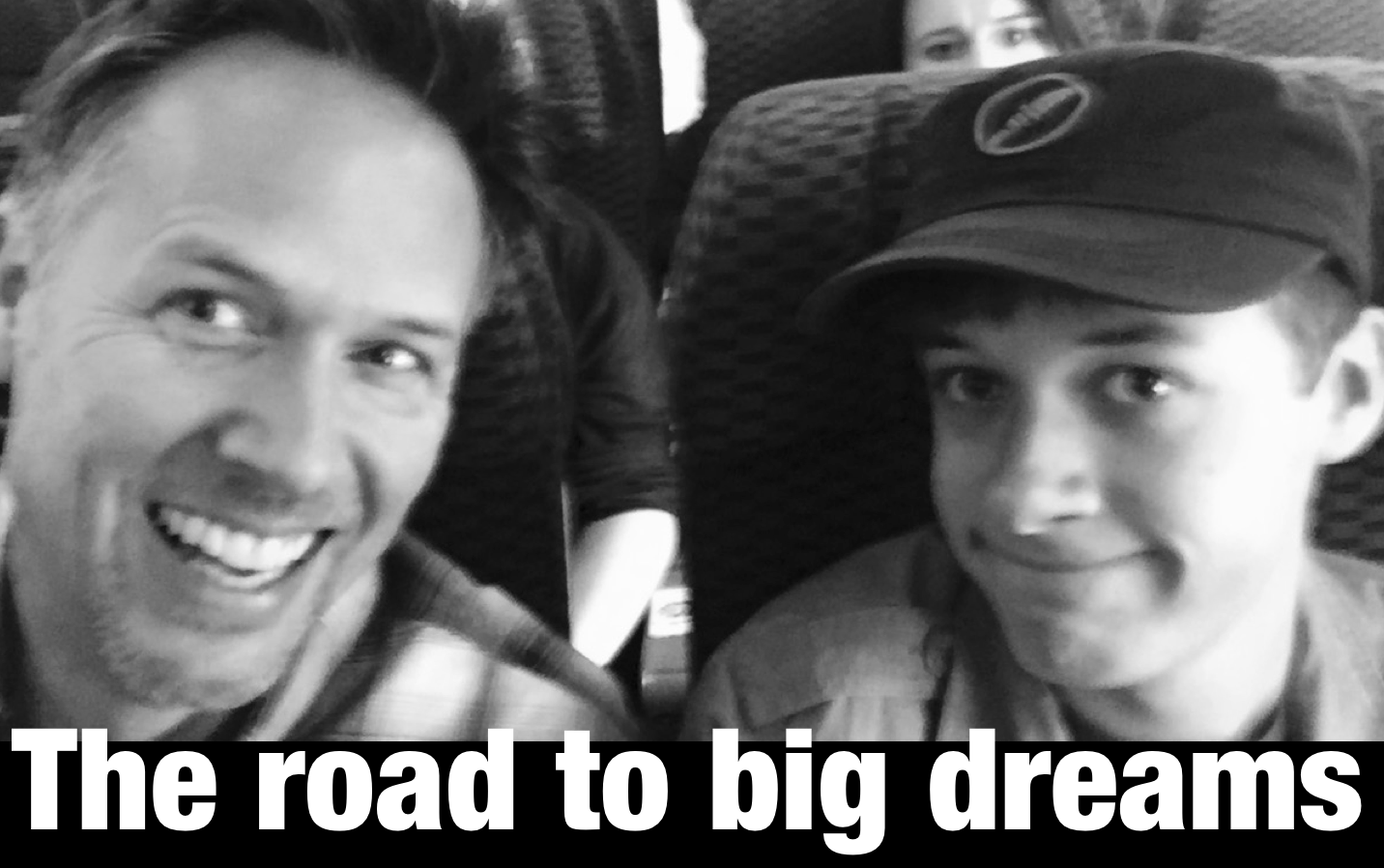 18 Nov The road to big dreams…

Sometimes the road to big dreams offers some surprising turns.

Sometimes those turns can deliver a blow that knocks the wind out of your sails.

Sometimes those turns can lead to a huge breakthrough that helps you take a quantum leap forward.

Sometimes those turns can bring a challenge that scares the shiznitz out of you and totally tests your metal.

And… sometimes those turns can offer an experience that’s just plain fun.

I was reminded of all of this recently… when our 17-year-old son accompanied me on a trip to a speaking gig. 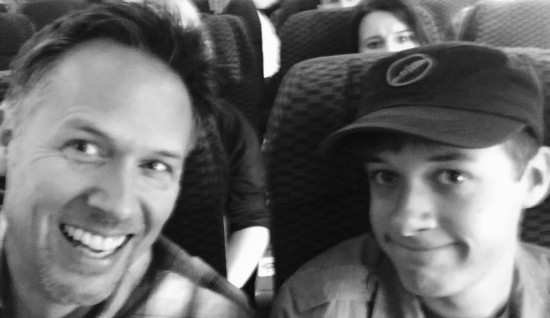 Now… I should clarify.  This wasn’t just any speaking gig.

See… I’m a professional speaker and I’m wildly blessed to say that I often get paid very well to speak around the country.

But in this particular case, I wasn’t getting paid at all.  In fact, I was paying for my own travel to participate.

The event was sponsored by an incredible organization called “American Dream U,” which is a non-profit started by an amazing team of people lead by Phil Randazzo.  A.D.U.’s central focus is to provide members of our military (and their families) with training as they transition out of the armed services into careers and/or entrepreneurship.   Phil and his crew recruit business owners and speakers to come in and provide day-long seminars that are designed to offer insights on everything from career coaching to interviewing to entrepreneurial strategies.

(NOTE: When Phil reached out to see if I could participate in an A.D.U. seminar at Fort Benning (located about 1.5 hours from Atlanta, Georgia)… I asked if I could bring my son who would be turning 17 on the day of the event itself.  Phil’s team shot back a quick email that read, “Are you willing to sign a waiver?”  I responded in a nano-second with a… “Heck yes!”  They shot back another brief email that said, “Bring him along!  Let’s do this!”)

So there we were… on a flight to Atlanta.

Now, I was particularly excited to get to play a part in the full-day of workshops, but I was also stoked about the day prior to the event.

That was the day where we were able to spend time with the soldiers… getting to hear about their world… and getting to experience some of what it’s like to do what they do.

Then there was the obstacle course that looked a lot like something straight out of American Ninja Warrior!  (There was a lot of grace and coaching here!  And although the soldiers we were with navigated each part of the course like ninjas… they were patient and encouraging with those of us who weren’t so… well… ninja-like.) 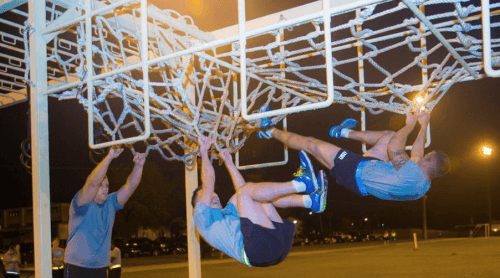 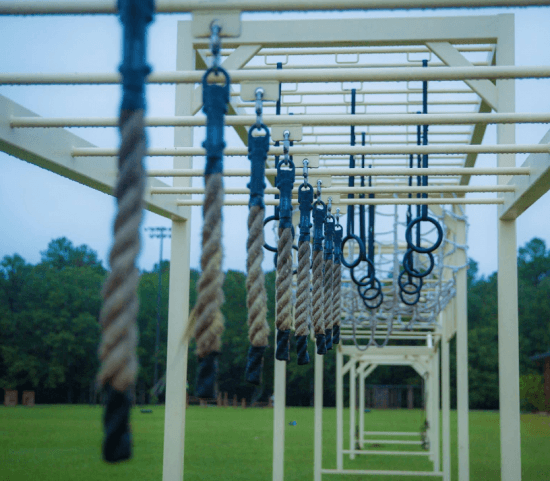 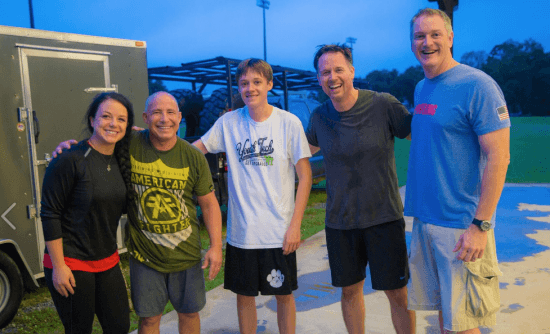 (NOTE: This experience definitely reminded me of that old commercial that showed how the Army got more done before 8 am than most people achieve in an entire day!  Whew!  We saw that first hand!)

Next, we got to explore the base with some amazing guides.   For example, we were able to go to the “Sim Center” to experience everything from a tank simulation (NOTE: Our son was a fantastic tank driver… but I was a terrible “loader.”  I just kept getting the sequence wrong.  But… Mack, our trainer and retired “Tanker,” was incredibly gracious AND hilarious… as he tried to coach me.).

Plus, we were able to experience some combat simulations as well as explore some of our military’s incredible technology… like Abrams and Bradly Tanks. 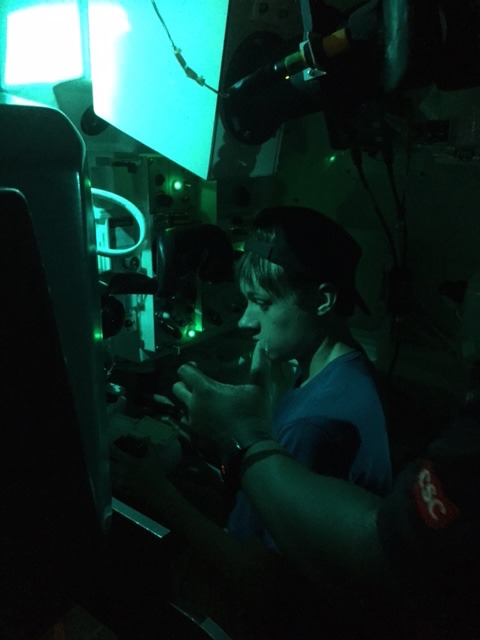 Our son in a tank simulator 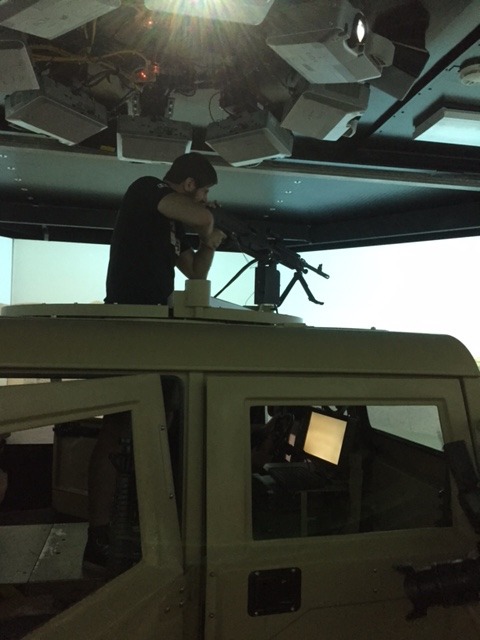 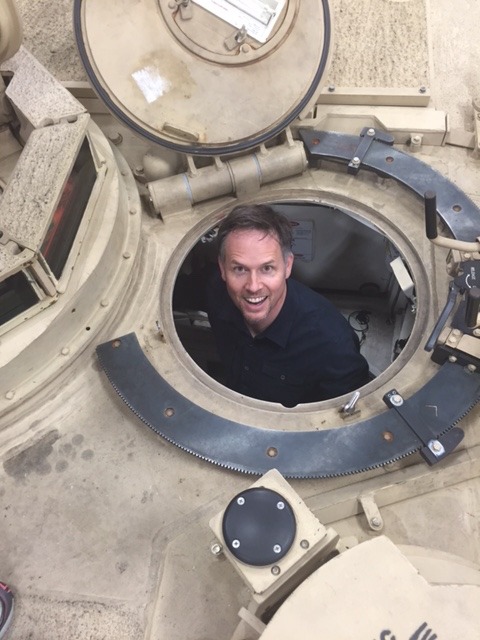 A dork in a tank 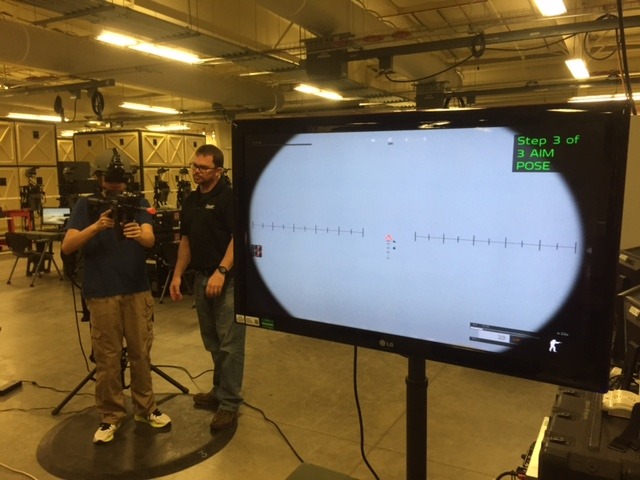 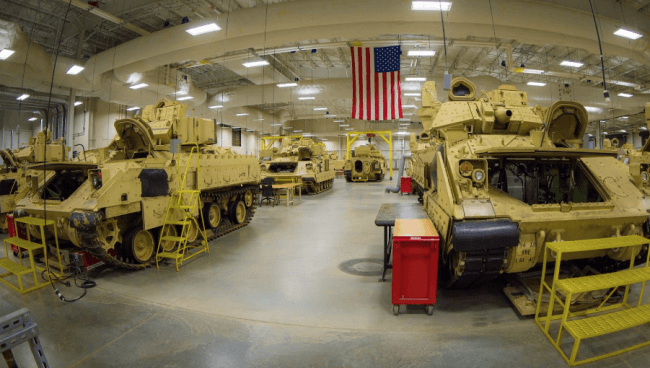 The Day of the Event…

Then the day of the event itself came.

We went from 9 am to 5 pm with talks and Q&A.  We even had a “Shark Tank” session at the end of the day in which we were able to dig into some specific ideas and dreams.

I was able to join a host of powerful speakers.  We had successful entrepreneurs, retired special forces officers, and we even had two Mixed Martial Arts coaches who had produced multiple world champion MMA stars!   It was a full day… and we did our best to provide tips, strategies and encouragement to soldiers and their families.

I was honored to do my part… and I was inspired by the other speakers throughout the day! 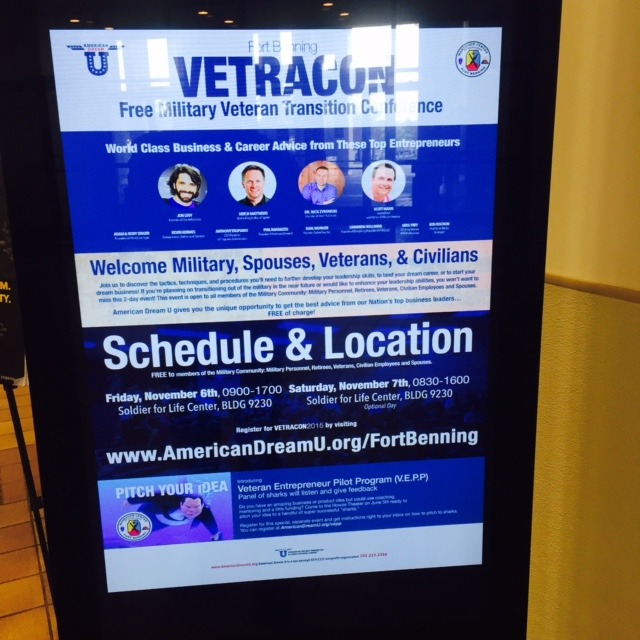 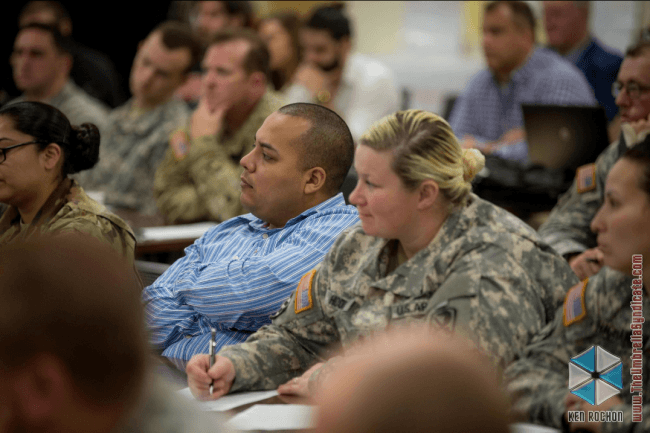 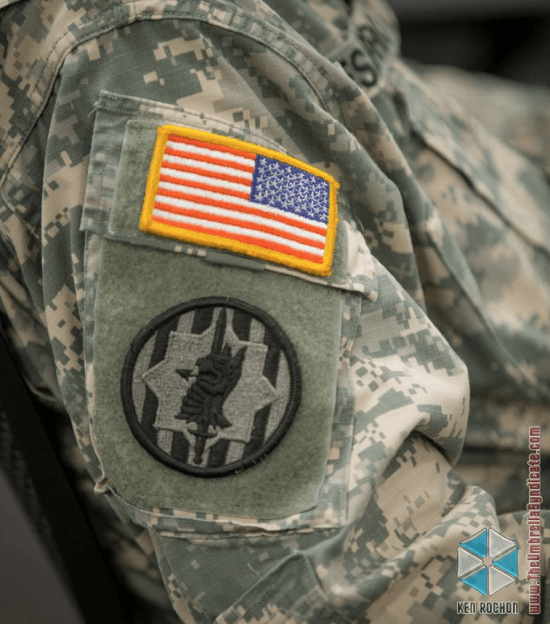 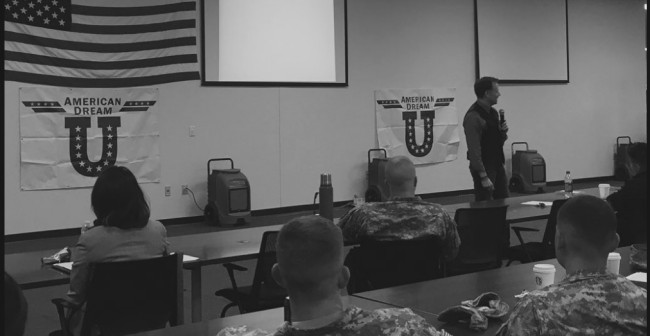 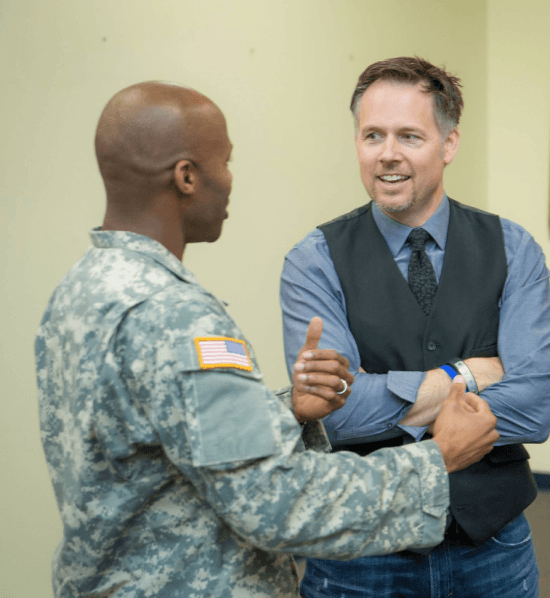 The amazing speakers involved in the day!

After, a long day of speaking and great conversations… our son and I retreated back to our hotel on base to reflect on the day.

It was at that point when I realized that although our job (as speakers) had been to come and inspire these men and women… I’ll be the first to admit that I left far more inspired by them and their commitment and sacrifice to our country!

The Road to Big Dreams…

So back to what I was originally talking about with the twists and turns that happen on the road to pursuing big dreams.

I can say that when my wife and I launched our business back in 2002, I had a big dream of getting to speak to and inspire audiences around the world.

As you can imagine, that road has had LOTS of ups… and some significant downs too.

And some… like this exceedingly special trip to Fort Benning with our son… were just… pure and simple… high octane… awesome.

And that’s what I want to leave you with.

Some of you are in the middle of your journey towards some big dreams… and that’s fantastic. But maybe today… you’re needing a little encouragement to keep going.

On the other hand… some of you are trying to find some ways to get started on a dream pursuit.

You’re trying to find that foothold so you can take that first small but significant step.

Well… I’ll be the first one to tell you that no dream pursuit is easy.

That’s right.  There will be some things that you will have to face… that will just be tough.  And some of those things will be surprises.  Things you won’t see coming.

(NOTE: May I also interject here… you’re tougher than you think! In fact, I’d bet good money that you’ll face those challenges head on and bust through them like one of Fort Benning’s Bradley Tanks!!!)

But I also wanted to offer this little story of my trip to Fort Benning as reminder that some of those surprises… will be cooler than cool.

A package to unwrap and savor.

So yes… there will be some surprises along the way.

But keep in mind… some will be amazing… and both (the tough and the amazing) will make you glad you stepped on that road to pursue something bigger!

Hey… I’d love to hear from you!

What’s been one of those “good surprises” for you as you’ve pursued a dream or a goal?  Maybe it was something small but important… like something you learned about yourself.  Or… maybe it was something BIG that changed things for the better for you.  Comment and share a story.  Let’s inspire each other as we travel this road together!

Photo Credit:  The high quality photos were thanks to Ken Rochon and the The Umbrella Syndicate