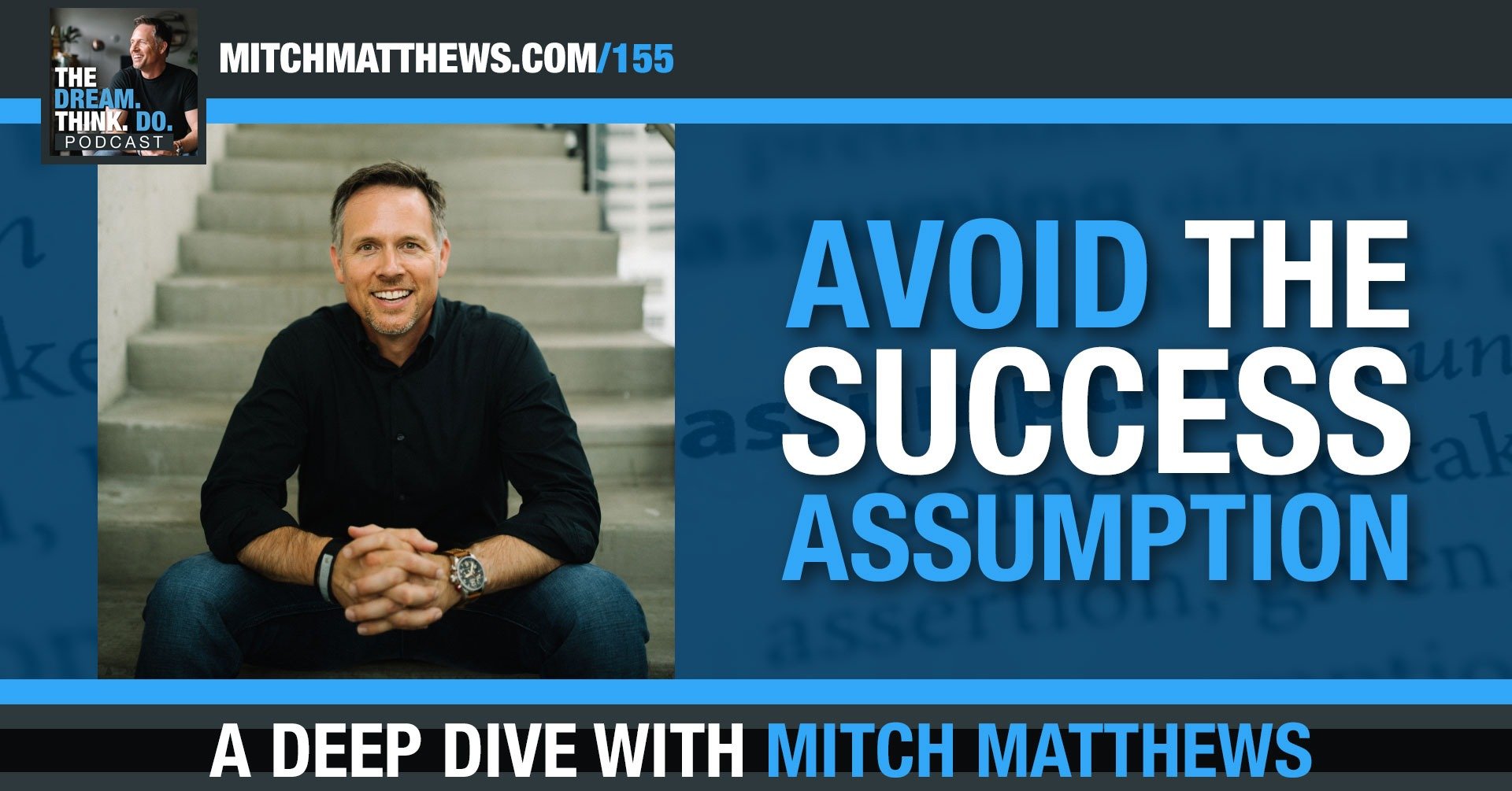 This week, Mitch Matthews takes a deep dive into something he calls, the “Success Assumption.”  If you don’t understand it, the Success Assumption is something that can hurt your ability to lead, love and communicate.  BUT if you do understand it you can build trust, understanding, and connection.  In the episode, Mitch walks you through what it is and he also offers you key strategies for avoiding it.

The Success Assumption is something that can get in the way.

It hurts your ability to lead and love others.  It’s something you want to avoid.

If you don’t… it can tear at your ability to build trust with your team.  It can hurt your conversations with your significant other.  It can wreck connecting with a friend.

FIND OUT WHAT IT IS AND HOW TO AVOID IT

Yup… the Success Assumption is bad news.  BUT… there’s also some good news.

If you understand WHAT it is… and HOW it works…  you can use it to be a better leader, spouse and friend!

It’s one of the most important leadership and communication concepts I’ve learned about in years!  And I want to share it with YOU this week.

Scroll down and leave a comment.  I’d love to hear about a time when you’ve seen or experienced the Success Assumption!

Here are some show notes to those who like those types of things:

[00:00] Introduction to the success assumption with Mitch Matthews.

[06:00] Generational examples of the success assumption.

[11:30] Professional examples of the success assumption.

[18:00] Another angle for asking about success.

[21:22] The success assumption and righting reflex from a parental perspective.

[25:16] Relationships and the success assumption.

For example, Matthews’ mother had been a stay-at-home mother, but when her children were in school, she worked to get a degree and a job. After her graduation, which Matthews’ parents saw as a success and an achievement to be proud of, Matthews’ grandfather took his father aside and started asking questions about whether the family was okay, if they were in financial trouble, or if they needed money. “My grandpa was actually very concerned,” says Matthews. “My parents had shared this good news to everyone, but my grandpa took it in a different way entirely.” For his grandfather’s generation, a wife having to take a job was a failure. However, Matthews’ mother had worked very hard to achieve this goal. “It caused a little bit of a rift for a while,” says Matthews. “It was a little bit of a discouragement, a little bit of a disappointment for my parents.” It was the success assumption at work.

The Success Assumption in the Workplace

The success assumption recently harmed a tech company who was about to have public stock offerings. The company had been very generous with bonuses for its employees up to that point, but when getting ready for the IPO, leadership decided to give stock options instead of cash options to their team. Although the stock options were incredibly generous, they went over like a lead balloon. Leadership thought they were giving a great incentive, but the employees wanted cash. The definition of success was different for the team than it was for the leadership.

“If you run smack into the Success Assumption it can be discouraging. It can shut down trust,” Matthews says. “People start to put up walls.” One of the best ways to avoid the success assumption is to invite clarity. Be curious. You can avoid the assumption with a few simple questions. Start asking your team what success looks like to them. Ask them what success looks like to them in one year, or five years. It’s a similar question to the generic ‘Where would you like to be in five years?’ question, but framing it as what success looks like in five years opens it up to be about more than just a particular role or title. Many team members are never asked this question, or they are only asked in an interview setting where they are more likely to give the answer they believe to be correct to the interviewer instead of the answer that is correct to themselves.

Another angle to take is asking them who they view as successful. This may be someone else in the organization, a celebrity, an athlete, or a historical figure. Ask them what it is about that person that makes them successful. “If you define that person as successful, what are you looking at? Whether they’re attributes, it’s how they look at life, it’s some of the things that they’ve achieved, some of the things that they’ve amassed, what is it?” Matthews recommends digging into why they view that person as successful so you can get a deeper understanding. “As they start to talk about these things, you’re going to start to get an understanding of what success means to that person,” he says.

When others define success differently than we do or attempt to achieve success in a different way than we would, something called the righting reflex flares up in us. We want to correct the other person or push them in a different direction. “That’s the kind of thing that can start to shut down trust,” Matthews warns. “It can start to interrupt the conversation. It can make it so that the person’s not going to be open with you in the future.” Instead of giving in to the righting reflex, remain curious and continue the conversation.

The Success Assumption and Righting Reflex for Parents

Parents can have the same conversations with their teens as leaders do with their team members. Ask your kids what success looks like to them, and who they think of as successful. Sometimes they will be open to having this conversation, but sometimes they will respond with some snark. Even if they are snarky about it, showing genuine curiosity can help deepen your relationship with them. When you feel the righting reflex start to flare up, overcome it by being honest. Tell them that it’s tempting to think that your way is the only way, but that you’re curious as to how they will go about going after their success.

“Every person is different,” Matthews says. “Experimenting is the name of the game.” You must let your children experiment. “These can be great conversations to have, and [they] allow you to stay away from the success assumption.”

The Success Assumption and Righting Reflex for Relationships

“One of the other areas where I see the success assumption creep up is between friends,” says Matthews. Be curious about your friends’ dreams, overcome the success assumption, and avoid the righting reflex, instead being open and genuinely curious about your friends’ dreams and goals. “As we do that, we really can help to have a much better conversation, and help inspire encouragement, trust, and relationship,” says Matthews. Not only will it help your relationships, but it might even help you clarify your own dreams and how you go after them personally.