The art and science of redesigning a career:Tom Pietras 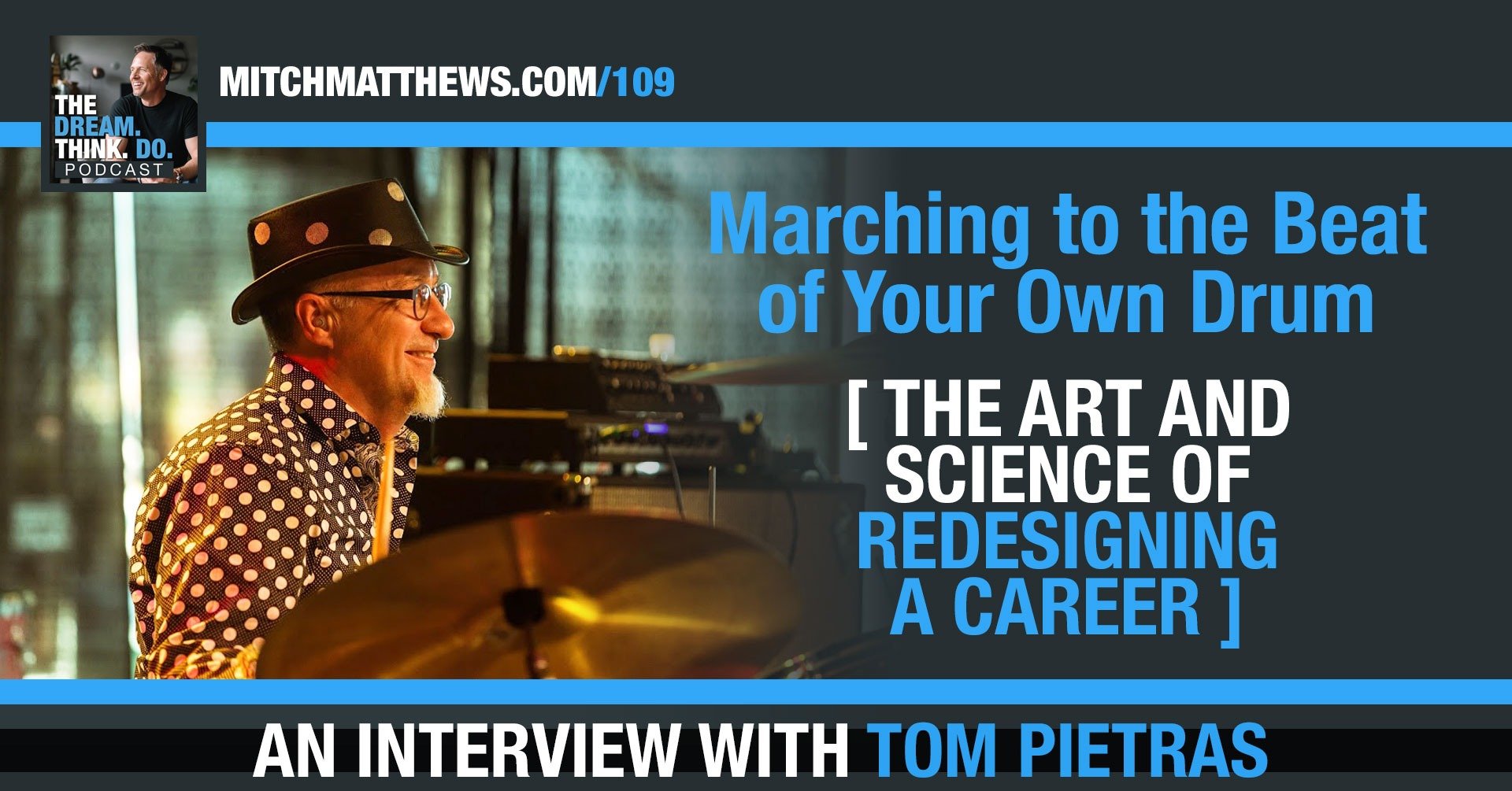 18 Jan The art and science of redesigning a career:Tom Pietras

Posted at 05:00h in Dream. Think. Do. by Mitch Matthews 0 Comments
5 Likes
Share

A few years ago, my DREAM THINK DO guest, Tom Pietras, asked himself a simple but profound question: “What would I regret if I got run over by a beer truck on the way home from work?“ (Hey… he lives in Madison, Wisconsin… so it’s not a crazy question!)  His answer (and his next steps) changed everything for the better.

By all outward appearances, Tom had everything going for him.

He was a successful executive doing challenging work he enjoyed. Plus, he had a happy marriage and was surrounded by some great friends.

What more could a guy want?

When he answered his “beer truck” question, he got hit with a surprise.

The surprise… was that he wanted to dig back into a former passion.

Drumming to be more specific.

He had drummed as a kid.  His dad had taught him.  He was good too.  But then a disagreement made him put down the sticks.

They stayed down… for 29 years!

But the “beer truck” question and a chance encounter at a dinner party changed everything… for the better.

During our convo, we dig into Tom’s story but we also talk through some of the specific strategies he used to set a new course for his life and career.

It hasn’t been easy… but the journey has been amazing.

Whether you’re 25 or 75… or somewhere in between…  I think you’ll be inspired and equipped by hearing from Tom.

I loved this convo.  I hope you do too!

I’d love to hear from you!

Also, here’s how you can find out more about Tom and his band,

CD, Know My Name by The Ryan McGrath Band is available on Amazon or iTunes.

Website: The Ryan McGrath Band for concert and tour dates.

Mitch and Tom also talked about working together on Mitch’s BIG Dream Gatherings around the country.

Here are the show notes if you’re interested in those kinds of things:

Summary
Even with a successful career and a happy marriage, there can still be something missing in life. The choice then is whether to keep pushing the feelings away or to open yourself up to your long-buried passions. Tom Pietras, a successful executive at American Family Insurance, faced such a choice. He found his answer when he asked himself one question, What would I regret if I got hit by a beer truck on the way home? The answer opened up a new world to him.

Midlife Crisis
When you’re going through a midlife crisis and you live in Madison, Wisconsin, asking yourself, What would I regret if I got run over by a beer truck on the way home from work, is not an unreasonable question. By all outward appearances, Tom Pietras had everything going for him. He was a successful executive at American Family Insurance doing challenging work with a career he enjoyed. In addition, he and his wife shared a happy marriage together. What more could a man want? When he answered his beer truck question, he also got the answer to this one.

Little Drummer Boy
Pietras’ father had played the drums. It was no wonder that by age four, he too had picked up the sticks. His father encouraged and mentored him for ten years. By fourteen, Pietras wanted to play in a rock band, but his father wanted him in a marching band. It was a rock band or nothing for Pietras. With that impasse, he laid down his sticks and didn’t pick them up again for another twenty-nine years.

When all those years later, he asked the beer truck question, Pietras knew the answer. He wanted to know if he could still play and if it would bring him the joy it once had. The more he thought about it, the more enamored he became with the idea.

Dinner and Dreams
Accompanying his wife to a dinner function he was dreading, Pietras settled in at a table full of strangers and hoped for the best. This was what he considered “a compromise date” and his expectations were not high. “Sometimes,” he says, “some of the best gifts come from places we never expect.”

“I truly believe as a faithful person, in divine intervention,” says Pietras, “and that the Big Guy has plans for us that we can’t anticipate.” Seated across from him was a woman he didn’t know, and with whom he appeared to have nothing in common. He was prepared for “stressful, non-interesting dinner conversation,” but about twenty minutes into their meal, the woman offered Pietras the temporary use of a set of drums that she had in her basement. Her late husband had been teaching their son to play, but after his father’s death, he wanted nothing more to do with the drums.

The very next day Pietras picked up the drums and thought, “Wow, this isn’t a dream anymore. It’s going to be a reality.”

Bigger Dreams
Success didn’t come overnight, but every day he worked towards his dreams. His father always told him that there was a “showman” in him, and he knew it was true. He wanted to play regularly for an audience. The marketer in him went to work and he met with the contemporary choir at his church and convinced them that a band would be a great addition. Then he went about making his own drummer marketing plan. He had goals. He sought out the best drummer he knew, Scott Schroedl, and took lessons. He developed a ten-year marketing plan, which included his name on a CD and to play before 600 people at one time. He wanted to become the best drummer he could be. He gave himself chances to succeed and to fail because failure gives you an opportunity to get better.

He became part of The Ryan McGrath Band and grew and stretched with the band. They cut their first album, Know My Name, went on to play the Lucas Oil Stadium, Lambeau Field, and have since opened in concert for Jennifer Hudson.

Tom Pietras Words of Wisdom
There is a plaque on Pietras’ wall at work. He puts his keys next to it, so he reads it at least twice a day, when he arrives, and when he leaves. It says, Proceeds as if Success Is Inevitable. So he does. He knows it’s coming because he sees it every day. And not only does he see it on that plaque, but he also sees it in his mind’s eye. Before playing the venues mentioned above, people would ask him what he thought it would be like to play at those places. He would answer, “I already know what it feels like. I’ve been there.” He visualized it so often and so fully that it was like he had already experienced it. He explains that it doesn’t matter if your dream is music, sports, writing, or something else, proceeding with success as inevitable will help get you there.