Create Opportunities | Turning a dream into a full time job! 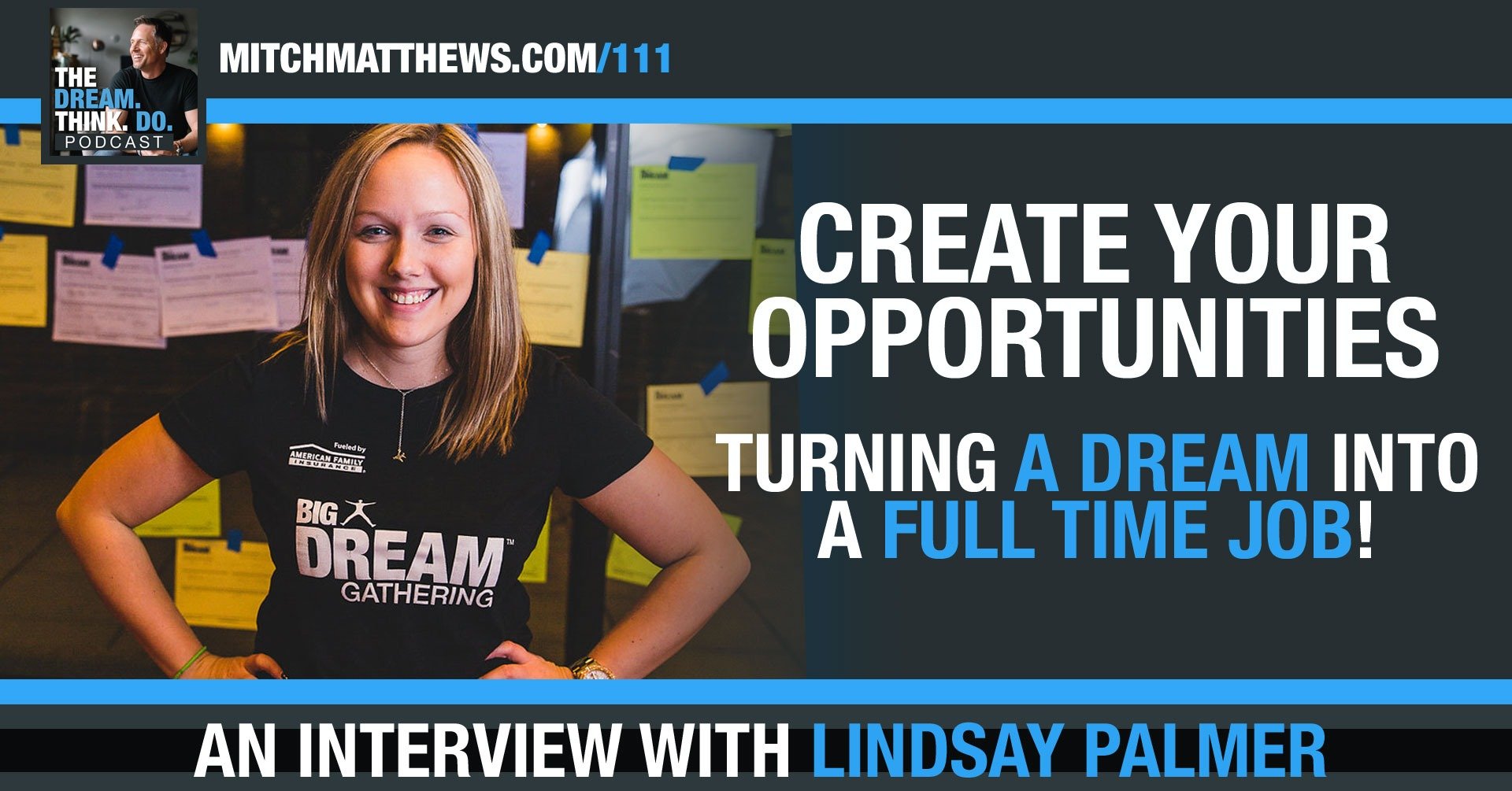 Posted at 05:00h in Dream. Think. Do. by Mitch Matthews 4 Comments
0 Likes
Share

Lindsay Palmer has made it a habit to create opportunities where none seem to exist. She did this throughout college and it got her a dream mentor and a position with the Pittsburgh Steelers. She did it after college to land her dream job. In this interview, Lindsay talks with Mitch about the strategies you can use to create opportunities and live more of the life you want to live.

In college, she couldn’t find an internship matching with her passions, so she created one.That’s right.She created her own internship.

(That effort helped her to eventually land a coveted position with the Pittsburgh Steelers.)

She couldn’t find a mentor locally, so she searched the country for people who were the best of the best in her chosen field.She reached out.She connected.

Those efforts enabled Lindsay to meet with one of the industry’s top leaders and then be invited to fly across the country to attend a series of events as her new mentor’s special guest.

Her “dream job” didn’t exist right out of college, so she worked a “side-hustle” to build up her skills and make some extra money.

Now… just a few years later… she’s in her dream job.And, I’m wildly blessed to say… that it’s with me and the team behind the BIG Dream Gathering.

I wanted to bring Lindsay on DREAM THINK DO, because she has some great stories and some powerful insights to share when it comes to creating opportunities… especially when none seem to exist.

If you’ve ever felt a little stuck…

If you’ve ever needed to make a change, but you just weren’t sure where to start…

I think you’re going to love this interview.

Oh and let me know what stood out to you from Lindsay’s story.Leave a comment below.I’d love to hear from YOU!

Lindsay and I talked about working together on the BIG Dream Gathering.

Here’s a Podcast Summary for those who enjoy those types of things:

Summary
Did you ever wonder why attendees of the Big Dream Gatherings rave about the experience? The idea behind the gatherings and the Dream Think Do podcasts is to help people connect with their dreams and live their best lives. In 2011, host Mitch Matthews met a Duquesne student Lindsay Palmer at one of his Big Dream Gatherings. This is her story, which she shares candidly, with humor and passion, just like she lives her life.

A Big Dream Gathering helps you connect with your dreams, and then connect with others. Open to ideas, and committed to finding career direction, Palmer asked a lot of questions of fellow attendees, speakers, and facilitators.

Her major was International Business Marketing, but where that would take her, she had no idea. She knew she loved to travel, but beyond that, her career path was a big blank. “The Gathering can be both inspiring and annoying,” says Palmer, “because you haven’t found your niche yet.”

During his presentation, Matthews made an off-hand remark, “Let’s say, for instance, you wanted to be an event planner…” For him, it was just an example to make a point, but for Palmer, it was her lightbulb moment. Something in her said a resounding yes! It all fit. She was great at planning and organizing, she loved events, she majored in marketing, and she could insist on a job that involved travel. From that moment onward, she started working her way towards her dream job.

The Do Part of Dream Think Do
Palmer returned to Duquesne with a pocketful of dreams, and wondered how things would unfold. In the meantime, she couldn’t shake the idea that her fellow students could gain so much from listening to the inspiring speakers from Dream Think Do. One of the first things she did was arrange for Tim from the Matthews team to come to speak at her school. She thought it would be good for students who, like her, weren’t sure of their direction. She knew it would be great for the Dream Think Do team too, because at that point, they hadn’t done much in the way of speaking at college campuses.

She organized and planned the event and it was so well received by students that she talked Matthews into coming to speak, as well. Another wicked success. Then a big breakthrough. She was invited to contact a woman Matthews described as “a rock star of an event planner” who operated out of Florida. Immediately, she contacted the woman, booked a ticket, and flew from Pennsylvania to have lunch with her and pick her brain. She ended up spending most of the day with two planners, both of whom were immensely helpful. She also had the opportunity to spend part of the day with a few of their other event people. She was just a college kid, but the speed with which she jumped on the opportunity thoroughly impressed Matthews. When he saw her in action he said to himself, “Maybe someday she’ll come and work for me.”

Identifying Your Dream Job
A dream job is a different thing to every person, but it has a common core.

A DREAM JOB is either doing work that you love, OR… it’s work that allows you to do something you love to do.

Matthews is quick to point out that he is not talking about a perfect job, because there is no such thing. He is talking about work you enjoy doing. “And,” he adds, “there’s a seasonable component to it because your dream might change over time, so this is the dream job for this season.”

Palmer started to look at opportunities right out of college because she couldn’t find a job she wanted yet. Convinced at one point that she should want a corner office in a big company. It turns out it might have been what she thought she should want, but it wasn’t what she really wanted. After sampling different roles and jobs, she learned from all of them, and found something good about each one. Over time she got clear about what she wanted her job to look like.

All through college, and then as a recent grad, Palmer worked hard on the side. She noted that all the speakers she brought to Duquesne said they needed help setting up events. This is what she built her side business on.

She says, “I’ve always been enamored with travel.” Even as a poor college student she decided to travel as much as she could, so this side hustle helped to pay for her adventures. She helped Matthews and other speakers book speaking engagements, in addition to working full-time at school, and later, a job.

Her peers at college asked her why she worked so hard. They didn’t understand. Even when she got into her full-time jobs, she didn’t draw attention to her side hustle because she didn’t want anyone thinking that it was taking anything away from her day job. Palmer frequently said no to social engagements because she had work to do. She knew it would help her get to her dream job much more quickly. She wanted the kind of job that wasn’t like what everyone else seemed to have. She loved what she was doing on the side and convinced herself it would pay off in the future.

Palmer Gets Her Dream Job
Lindsay Palmer loved experimenting with event planning on the side, with bookings for the Dream Think Do team. She and Matthews talked about helping him organize events.

Matthews had been impressed from the first time she invited him to come speak at Duquesne. She set everything up, just to help, and he thought that was a really big deal. She offered to help him, “and from there, everything just blossomed,” says Palmer. “It was like a 4 or 5 year process and a lot of hard work, but it was worth it.”

Palmer now works at event planning for The Big Dream Gathering. It is neither perfect, nor easy, but she appreciates the payoffs. “Travel is such a big part of my life and I knew that whatever job I took, I had to be able to travel. I can live anywhere in the U.S. Part of my job is to visit other college campuses. I constantly experiment.” Palmer appreciates the flexibility and autonomy of her job, and she loves that it feels like a way of giving back. Some of the students remind her very much of herself. “I get the feeling that this is exactly where I should be.”

Parting Words of Wisdom
When asked what message she might have for a person listening from their dorm room, car, or cubicle, Palmer replies without hesitation, “I would say a couple of things. Get creative. You don’t need to quit whatever you’re doing, even if you’re frustrated. You can experiment. I experimented for 5 years before I was able to do my dream job. You can start experimenting right now, even if you’ve been in an unsatisfying job for 30 years. I love to talk about what I do, so I would welcome anyone who wants to talk about it. Just because it’s not a full-time thing right away, it still can be, in the future.”

Visit Us
Visit us at: Big Dream Gathering.