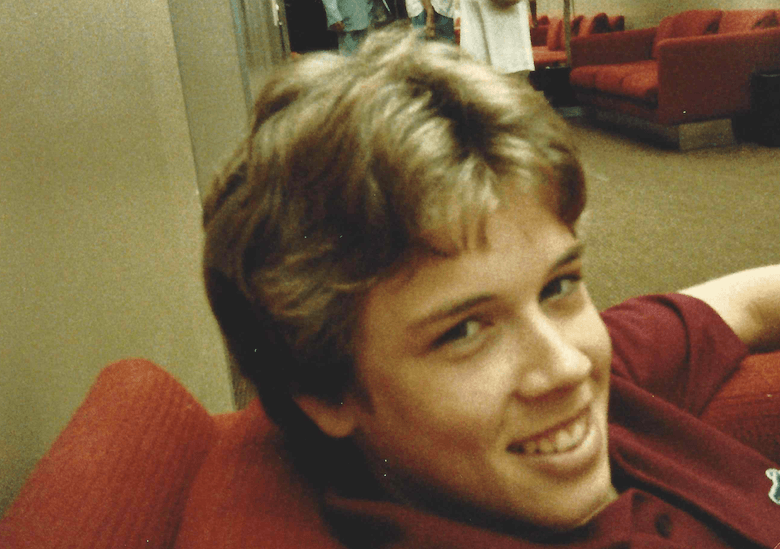 Welcome to Day 7 of the “30 Days of Punching Worry In the Face!

At the risk of having to turn in my “man card,” I have a confession.  When I was younger, one of the things I worried about was bullies.  As a result, I was always scared to attend junior high dances, participate in overnighters held at the local YMCA or go to summer camp.  This was all because I was worried someone would beat me up.

Now, I’ll be the first one to point out that I always felt like I had a bit of a “target” on my forehead.  I just plain stood out.  For example, when the original “Footloose” came out… I was the first one in my small town school to rush out and buy an all-red set of Nikes.  This doesn’t sound all that outlandish now based on the freakishly wild colors everyone’s shoes are nowadays but at the time… it was kind of… well… weird.  I also wasn’t afraid to wear clothes that were a bit different.  In fact, one of my favorite things to wear in high school was a canary yellow Union Bay sweatshirt that was made out of a material that looked a little bit like fur.  (Yeah… um… weird.)  And let’s not forget the fact that my hair has always seemed to have “loft” whether I used a product or not.  (Seriously… if I let my hair grow out too long, I start to look like Bozo the Clown because it jets out from the side of my head!)

As a result of all of this weirdness, I just always felt like I was easy pickings for someone who might be itching for a fight.

I would still attend events but in the back of my mind, I was always fearful.  Even though I’d look like I was having a good time on the outside… I was missing out on really being in the moment and just enjoying myself.

So I joined a Tae Kwon Do school on my campus.

It was pretty easy to do because the classes were held in the basement of my dorm and they were taught by a good friend.

I’ll never forget that first night.  I had convinced my rather eccentric roommate Tom to come check out the class with me.  I was running late so we agreed to just meet in the dormitory basement.  As I arrived I saw Tom was appropriately wearing a t-shirt and sweatpants.  But then I noticed that around his waist he was sporting a black leather belt he’d bought at Wal Mart earlier that day.   I must have had a puzzled look on my face as I approached him because he quietly leaned over and whispered, “I thought I’d go ahead and wear a black belt to show I was serious.”

As the class started there were other things that sparked potential worries too.  One, the lead instructor was my age but his abilities were incredible.  He could do the splits, while I was so tight I had trouble touching my knees.  (Yeah… that’s right. Not my toes… my knees!)  There were a lot of people who appeared to be much more athletically inclined than I was… including but not limited to the one girl in the class who was able to kick the weight bag with so much force it seemed to rattle the building.  I’ll admit it.  I almost quit.  But I told myself I should just go one more night… and then another… and another.

Over the next 3 years, most of the people that joined that first night… dropped out.  But I, along with a few friends, stayed with it to go all the way to achieve higher ranks.

In fact, I’m wildly blessed to say that although I never was able to do the full splits, I did eventually earn my black belt.  But more importantly, my confidence grew and my fear dissipated.  Truth be told, I was never asked to star in my own martial arts movie and I never reached a Chuck Norris swagger… but I did feel more confident, and I found myself a lot less worried about my safety.  (It didn’t hurt that I also stopped wearing that canary yellow Union Bay sweater too!)

Some fear is good.  Some fear keeps us safe.  It keeps us wary of that dark ally, so we don’t walk down it alone.  Fear keeps us (hopefully) away from some bad situations because they just don’t “feel” right.  So yest, fear can be a good thing.

Worry just takes fear to the extreme.  It takes it from something that can be “life-saving” and it makes it “life-stealing.”  Amen?

I’ll be the first one to admit that it was probably good for me to be “somewhat cautious” as I marched around at Jr. High dances in my cool red Nikes.  But I went further. I moved into worry. And worry stripped a lot of the joy out of those moments.

Then I decided to “Lean In.” 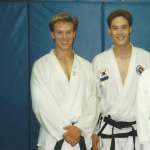 With my friend and instructor, Kevin Haugh

In this particular area… I decided that with this fear… I was going to “lean in.”

Instead of just running around fearful and worried, I decided to step into it.

So I took a Tae Kwon Do class.

Not in some sort of crazy neanderthal kind of way… but in a way that really helped.

I really liked it.  I went from being really fearful, to really enjoying the martial arts.  So much so that now (a few… as in 20+ years) after my college experience, I’m pursuing another black belt in different martial art.  This time… I’m not doing it because of fear and worry.

This time I’m doing it because I enjoy it. (Plus, I’m doing it with our youngest son which is pure awesome in and of itself.)

WHERE Could YOU “LEAN IN?”

So… with this particular worry… I “leaned in” and found out something about myself.

What’s one of those things that cause you to worry… that instead of dismissing it or trying to forget about it… you just need to do something to “lean into it?”

I bet you’ll come up with something.

Let me know your thoughts.

Thanks for being in this together,

Don’t Forget: Leave A Review And Enter To Win!

If you leave an iTunes review for my new “DREAM. THINK. DO.” podcast before February 8th you can enter to win some great prizes. Find out more by clicking here.