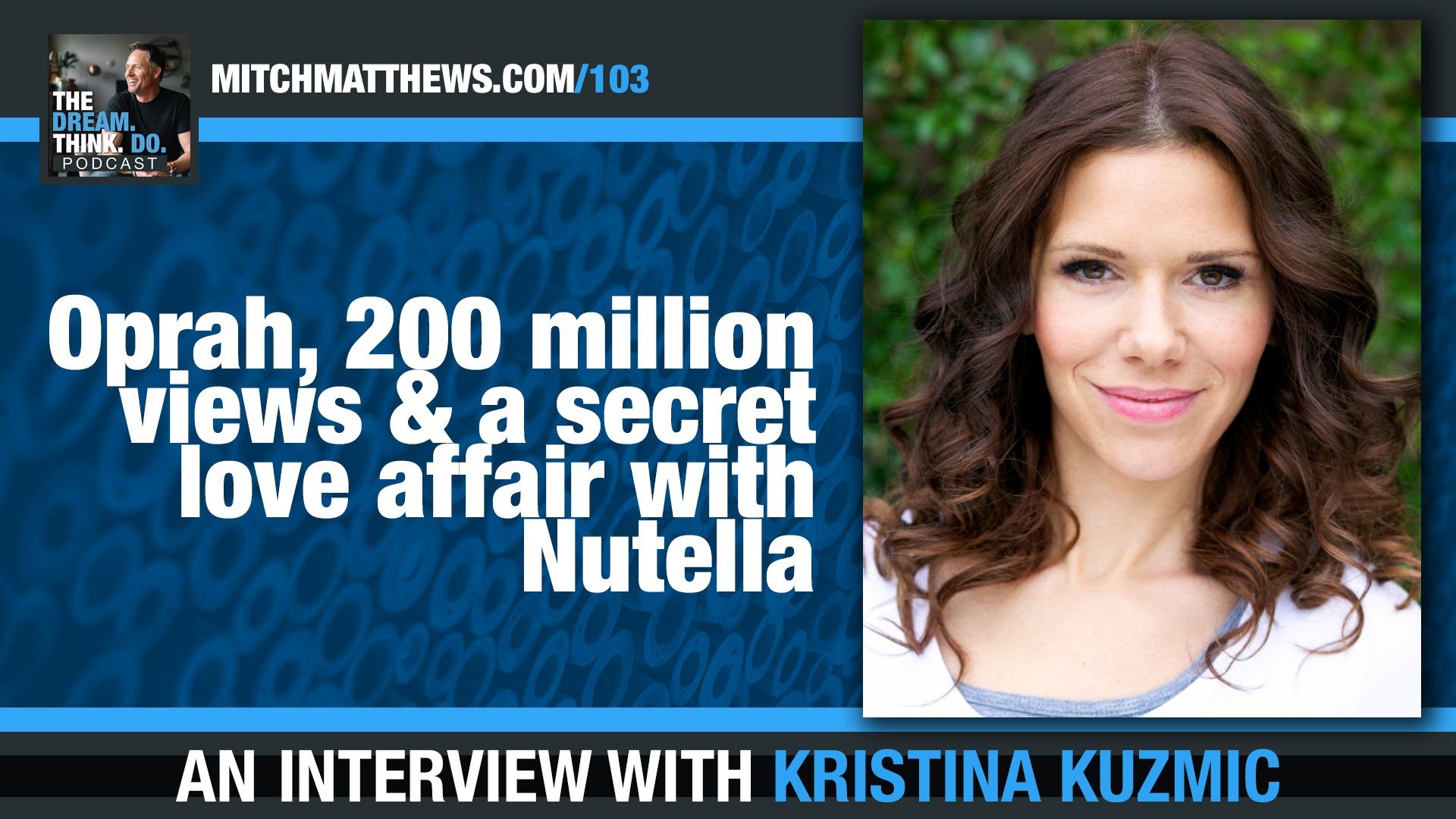 Posted at 04:00h in Dream. Think. Do. by Mitch Matthews 0 Comments
0 Likes
Share

Finding your passion can take a bit of searching. When you identify it, don’t wait for permission from someone else to act on it. Kristina Kuzmic embodies this mindset, going from down-and-out to a social media sensation that Huffington Post calls “parenting comedy at its finest.”

An Avalanche of Change

Success rarely comes fast and easy. The process of identifying your passion, finding a way to act on it, and sustaining follow-through can be tough. No one knows this better than social media sensation Kristina Kuzmic. She’s received rave reviews from People Magazine for her fun, parenting videos on YouTube and has upwards of a quarter of a million followers on Facebook.

Her confidence shines through her smile and you’d never guess that just a few years before, she was recovering from a marriage break-up and living in one room with her two kids. She bought them bunk beds and slept on the floor next to them. They got by on food stamps and her three part-time jobs. Though she dreamed of better things, she had no idea of what dramatic changes were about to happen.

Kuzmic wanted to find meaningful work but had no idea where to start, so her new husband handed her the car keys and said, “Go. Take a drive and figure it out.” Her career goals, it turned out, were not lofty. She wanted to create fun videos for YouTube. So she did, and people loved them. When a friend encouraged her in 2010 to submit an application to The Oprah Network contest for a new show, she did. Less than a month later she got a call from the producers and ended up with her own cooking show, “The Sticky Cook”. She also ended up with a brand new car courtesy of Oprah.

Kuzmic’s head was spinning from the rapid-fire change in her life and she remarks, “Instead of giving me a glass slipper, Oprah gave me a car!” Something about that struck home, and Kuzmic says, “I had been feeling like a loser and a failure, but when I got the Oprah show I realized that Oprah believed in me more than I believed in myself. It hit me like a ton of bricks, but the good kind of bricks, not the bad ones.”

People often have difficulty pinpointing their passion or purpose. Kuzmic’s advice for that is to “try just paying attention to what gives you goose bumps. Write that down. I had a whole list of random notes in my phone.” When you have accumulated 100 notes or so, review them and look for a common thread. “That is your passion,” Kuzmic says, “build on that.” In working with her own passion, Kuzmic found her vision unfolding and realized that she wanted her videos to support and encourage moms.

The only problem with the video idea was that Kuzmic didn’t have a good camera and she didn’t know how to edit. All around her she saw people waiting for permission, for some third party to tell them their idea was good and it was okay to move forward. In her own life that wasn’t happening, so she decided to put her videos out herself.

“No more excuses. I’m just going to get this done,” she said. With her do-it-yourself attitude Kuzmic made plenty of mistakes, but she kept moving forward. She realizes there must be others like herself, who berate themselves for making mistakes. “If that person is out there,” laughs Kuzmic, “just remember that I have a video I posted where you can’t hear me talking.”

Kuzmic’s told that viewers think of her as a friend they want to hang out with, laugh with, and open up to. Her response? “That was the nicest thing anyone ever said to me.” Her real, raw, and authentic nature draws followers to her. “What surprises me the most,” says Kristina, “are the moms who pour their hearts out to me. It really motivates me.”

Everyone has fears and insecurities, and Kuzmic is no exception. “I still have feelings of being a total loser and failure, but I also have a choice. I can let the fear win, or I win… but I have those days, like, oh my god, somebody tell me I’m doing okay and all my kids won’t end up in prison!”

“I’m starting a series of videos called Monday Wine Milkshakes,” says Kuzmic. “I’m going to remind you that you are a badass and that there is always dessert.” There are plenty of speaking engagements for Kuzmic these days too, and she says she gets a high from them. It’s a growing part of her business and she loves the chance to tell her story in hopes it will inspire someone.

Do Something for Someone Else

When asked what she would say if given the chance to speak to a mom just like she was, Kuzmic doesn’t hesitate. She takes us back to that bleak period in her life and how she was feeling pretty down. She had read that if you want to feel better you should do something for someone else. With no money for a babysitter, volunteering wasn’t an option. But she still wanted to give to others, so she sent out messages to her friends that every Wednesday she would host a community dinner. They should come and also invite anyone they knew who needed a good meal or companionship. Determined despite no budget to feed a large group, Kuzmic went to the dollar store, bought macaroni and cheese, and embellished it with her own special touch. Not only did Kristina feel better, but her guests left that night with full stomachs and a smiles on their faces.