How a lunch at a truck stop changed my understanding of leadership and dreaming big… forever!

13 Apr How a lunch at a truck stop changed my understanding of leadership and dreaming big… forever! 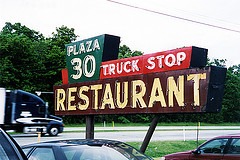 How a lunch at a truck stop changed my understanding of leadership and dreaming big… forever!

As I’m speaking with organizations about dreaming big… I sometimes get the question… “Does it really make sense for a manager to encourage a team member’s big dreams if they fall outside their current work?”

My response is an emphatic “YES… with boundaries!”

Here’s a story to explain my response.

A number of years ago, I was a sales person in the pharmaceutical world. I was with a growing company and I was managing a HUGE territory in the Northwest. In fact, I had 2/3 of Montana, 1/2 of Wyoming and 1/4 of Idaho.

Or… as I liked to put it… I covered the northern half of the Louisiana Purchase.

Due to my location and the company’s growth… I had a number of managers over the years.

Well… one particular year… I was assigned to a different manager and his name was Greg Walker.

Greg was an interesting character.

I had never met him but he was well-known in the company. Better said… he was infamous.

He was known for being a bit of a cowboy. He was far from “corporate.” And although he was incredibly successful, he didn’t like the limelight.

He was also known for getting things done… but on his own terms.

I knew he expected a lot from his people but I also had heard that people loved to work for him.

As you can imagine… I had a lot of questions as I was transitioning into his district.

But then it happened. I got a phone call from Greg. It was brief and to the point.

He said we needed to meet… and even though we were in the buttoned-up world of big pharma… he wanted to meet for a strategy session at his favorite truck stop. (He said they had a good buffet.) “Oh… and by the way,” he said as we were hanging up, “if you wear a tie… I’ll shoot you.”

A few days later we had our first meeting. We met and sat down in an orange… hard plastic booth. As semis rolled in and out of the parking lot, we talked for a bit… about our history with the company and the industry.

We ate… and I had to admit that he was right about the buffet.

But then we got to it.

We pushed our plates aside and we got to plan for the year.

Now… what came next surprised me.

Before he pulled out my goals for the new year and my numbers from the last year… before we discussed marketing messages and bonuses… before we talked about potential product launches and competitor updates… he asked me one question.

He literally sat across from me in that hard plastic booth and asked, “Where do you really want to be in 3 years?”

I was still relatively new with the company and we’d only known each other for about 45 minutes… so I played it safe. I hit him with a quick barrage of how I wanted to work hard, hit my numbers and serve my God, my country and my wife.

You know the drill. Give them what they want to hear and it will all work out. Right?

Well… he sat quietly for a minute and then he responded.

He kept it short and sweet. In fact, it was just a two-word response.

(Okay, he didn’t say bull pucky but this is a family-safe blog so we’ll just go with “bull pucky” for this post!)

I’ll admit that I couldn’t keep a poker face and my jaw dropped a bit.

He said, “Listen, Mitch, you already have the job. You’re not interviewing right now. And unless you shoot straight with me and tell me what drives you, I can’t help you. So quit with the B_ answers and tell me what you’d love to be doing in a few years.”

I looked him in the eye and thought for a minute.

I got the feeling he was telling the truth and this wasn’t a setup.

I could tell that he wanted a straight answer… and deep down inside… I wanted to give him one.

Plus… I really got the sense that he wanted to help me.

So I shot straight with him.

I said, “Well, honestly, someday I’d really like to be in the training department. I like to speak and teach and I’m pretty good at it. I think I could help them and I really feel like I have some ideas that could make an impact.”

He said, “Then what? What’s after the training department?”

And although he didn’t say it, his eyes reminded me that I needed to keep up with the pattern of truth and straight up answers!

I thought for a minute and then went for it… “Well… okay… then what? Well, I’m not sure when it would happen but some day I’d like to do some speaking and training outside of the pharma industry. So I’d like to start doing that more and more and make that my career.”

My words hung in the air for a minute and my heart raced a bit. I’d been transparent and taken a risk.

And in that nan0-second… I started to realize that I’d just shared one of my big dreams with him… and it had absolutely nothing to do with helping him make his district successful or to sell ulcer medicine.

He sat for a second longer and then he leaned in… inviting me to do the same.

As we sat hunched over the table… he said almost in a whisper… “Okay, well, that all sounds good. Let’s get you there.”

I have to say that I couldn’t believe my ears, but at the same time, my whole body relaxed.

I didn’t answer, I just shook my head from side to side.

He said quietly but boldly, “You work your _____ off out here and we blow your numbers away. Plus, I’m going to get you every opportunity to train our district that I can. I’ll also be looking for ways to get you to Chicago so we can get you noticed and so they can see you in action. What do you think?”

I was stunned. I didn’t know what to say.

He went further, “Listen. I believe you can do it. But you’re out in the middle of nowhere. People at corporate don’t know you yet. You’ve got to prove yourself… maybe even more than people in bigger cities or in higher-visibility territories. I’ll help you but you’ve got to commit to working hard and blowing things out while you’re here. What do you say?”

So there it was. In about 4.2 minutes… he’d laid out a plan to help me to pursue my big dreams AND he’d linked it all to my current work.

I was blown away. I was excited. And… I’ll admit… I was a bit cautious.

This was so different from anything I’d experienced before in corporate America… that I just had to ask one more question. It was a risk too but I figured… I was on a roll.

I said, “Okay, that sounds great, but in the spirit of honest questions and answers, why would you do that? Why would you help me get promoted out of your district? How does that help you?”

He sat and thought for a second before he responded. Then… in a voice that sounded like a combination of John C. Maxwell and Clint Eastwood, he said, “I’ve been working this district for as long as I can remember. I like it here and I want to stay here. I’ve found that the best way for me to do my job and be successful is to find out what my people want to do at work and outside of work and help them do that. I’ve been doing it for years and some have been with me the whole time. Others have gotten promoted or have moved to pursue other things. But I’ll tell you this approach has worked pretty well so far and I NEVER have a hard time finding people who want to work for me… and work hard while they’re here.”

I was blown away… right there in that cheap plastic booth… AND… I continued to be blown away over the next 2 years… as Greg lived up to his word!

And can I tell you… that within 3 years I was a Program Training Manager in the training department… and that was a huge step towards what I’m getting to do as a speaker and coach on a daily basis now.

Plus… Greg Walker continued on with his strategy and became one of the most consistently successful District Managers in that company’s history.

Did his strategy work? You bet.

I blew my goals away each year I worked for him. In fact, I worked harder for him than any manager I’ve ever had.

Even more importantly… I would have taken a bullet for him… and honestly… I still would!

(I’ll even admit that even though it’s been over a decade since I worked for Greg… just writing about him today has made me a little misty… because my gratitude for his approach to management and leadership impacted me so much!)

So how could you apply Greg Walker’s approach?

And as we wrap up… let me give you a little boost in this direction.

Here are a few “Greg Walker Approved” questions to help… as you’re helping your team… your employees… your co-workers… your mentees… to dream bigger.

Now… I could go on and on about this set of questions but I’ll just say that you can always find links… even if it seems like a stretch. As an example… I know that Kurt Warner worked for Hy Vee, a grocery store chain, while he was pursuing his big dream of the NFL. I know that he linked some of the things he learned about working hard and working with people in the grocery store… to his success as an MVP Quarterback in the NFL! So… yeah… you can always find links! Just look for them!

This last set of questions is for you (the leader or the mentor) to ask yourself.

I could go on and on with this subject but I’ll wrap it up with this parting thought.

After hearing Greg’s story and the subsequent questions… I still have managers from time to time… who will push back on the idea of supporting their employee’s big dreams out of fear of losing them.

I’ll acknowledge that fear as something that’s very real and understandable, but I’ll counter with this.

Chances are… if the person has a big goal or big dream that’s outside of their current work… they will leave at some point to pursue it anyway. With the Greg Walker approach… you at least get them to fully engage and work their _____ off when they’re with you… because they can see the link between their dream… and their current work.

AND just as importantly… they will be more loyal to you because you’re helping them go after their big dreams and goals!

Okay… that’s it for now.

Keep dreaming BIG… and keep helping others to do the same!