Breaking Through When You Think You Can’t! with Mitch Matthews 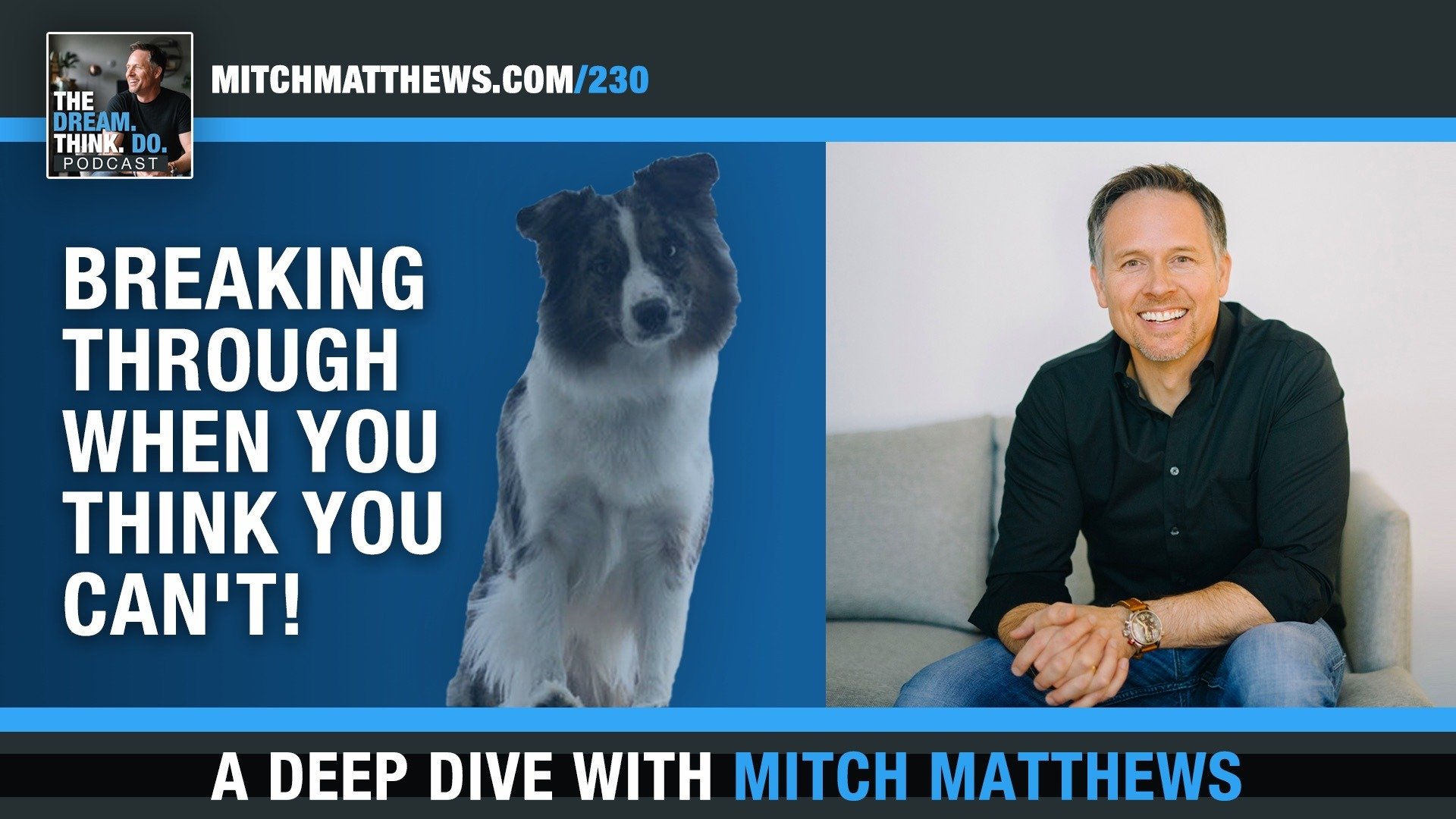 02 Jul Breaking Through When You Think You Can’t! with Mitch Matthews

Welcome to episode 230 of DREAM THINK DO. This episode is a deep dive.

Here’s our focus, we’re going to go after those areas where there is an inner voice that’s saying “I can’t.”

Maybe one area for your brain knows you want to do something, but another area is saying “I can’t.” And you know those “I can’t” are getting in the way of something BIG you’re wanting to do!

We’re going to talk about a way to break through those “I can’t.”

Most of it is just going to involve a story of my puppy. How about that? 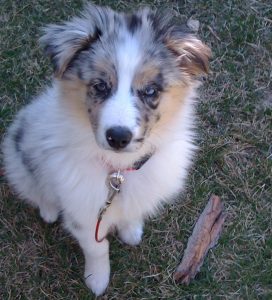 We’re going to focus in on a particular area because for us in the United States, I know we’ve got a dream, think, doers all around the world and I love you all, but specifically this week in the United States, it’s 4th of July.
Time to be with family, celebrate all of those things. It’s great. I always, always think the Independence Day is a good day to question yourself and say, “Okay, what’s something I want to break free of?” Right? Whether you live in the United States or not, it’s a good question to ask and to be able to say, “All right, you know, this time next year, whether it’s July 4th or even July 1st that’s fine because that is also in the midpoint of the year, right?”

“What’s something I want to be doing differently by this time next year?”

“What’s something I want to break free from?”

“What’s something I want to experience, do, achieve all of those things?”
These are great questions to ask. It’s an important time to ask, but at the same time, when you start to think about doing something new or taking something to the next level, there’s a very good chance there’s a part of your brain that might start to scream, “BUT I can’t do that.”
Maybe those “cant’s” are based on experiences. Maybe you’ve tried something new and it didn’t go so well, or maybe you’ve tried that exact thing and it didn’t go so well. Maybe you went down in flames in front of friends and family, whatever it might be, or maybe it’s just straight-up fear of trying something new. 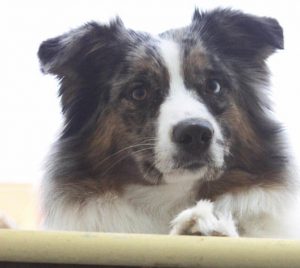 Just fear that it won’t go well. Fear that you might make a fool of yourself, those kinds of things, but there’s a part of your brain that’s screaming, “I can’t.” Well, I want to go after that part of your brain today as we’re talking together. The way that I’m going to do that is to tell you a story involving our puppy, our dog Lily. That’s right.

Because I believe in puppies and dogs and the power of such, I will include multiple pictures of Lily on my website. You can go to mitchmatthews.com/230 because if you’re a dog person, there’s nothing better than puppy pictures, right?
Now, Lily is an Australian Shepherd. She’s absolutely a gorgeous dog, and I’ve been a dog person almost all of my life, well, I’ve been a dog person all of my life, and I’ve had dogs much of my life. I grew up with a Samoyed, have had multiple huskies, a Labrador Husky mix, which was an oops, but a beautiful, beautiful dog.

Let’s just say that one of our huskies and one of our neighbor’s Labradors had relations. It wasn’t planned, but it made beautiful puppies, I can tell you. Now we have Lily, our Australian Shepherd. See what I do? I go off on these tangents. That’s why these podcasts get to be longer than maybe they should be.

Anyway, all right, so Lily, when we got Lily, Lily is an Australian Shepherd. If you’re familiar with this breed, they’re wicked smart. I’ve had multiple dogs. Again, been a fan of dogs for years, but this dog breed is incredible. I mean, within days of having her, she was tiny. We could hold her in her hands, but yeah she was starting to respond to voice commands very early on. I mean, I’ve taken Labradors and huskies to obedience training and it didn’t always go so well, but this dog, my goodness, like one day of obedience training, she’s responding to hand commands, not just voice commands, hand commands like a wicked smart dog.

Here’s the thing, I’ve never seen a smarter dog, but at the same time she learned something early on that was inaccurate. She learned something that was wrong and it had a big impact on her. So we’re going to talk about that, because early on when we first got her, she was a little puppy. We could hold her in our hands, this cute little puppy. Again you should go check out the pictures at mitchmatthews.com/230. Because I don’t know, there’s a lot of cute puppies out there but Lily’s probably got to be in the top five of all time. So you need to see this picture. 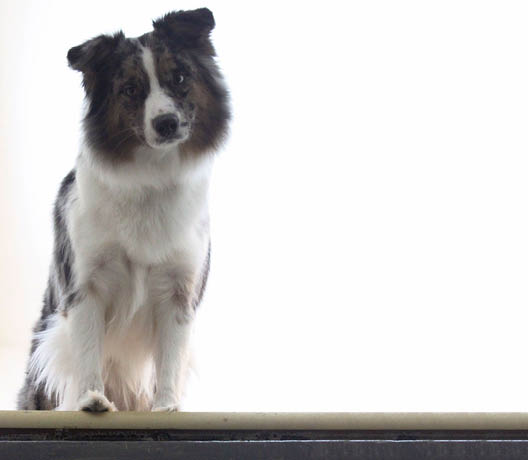 Anyway, when we got Lily home, we decided, we lived in a ranch home at the time as a one floor, one level ranch with a basement. Our family room was down in our basement, and we decided that that would be a good place to have her, to keep her a dog kennel, and keep her bed and things like that. So she was too small to go up and down the stairs to our family room, and so we will carry her up and down the stairs.

It was fun. We all enjoyed it. Our boys loved to do it. My wife loved to do it. I loved to do it, and it was amazing. Then I will say that it something we enjoy, but it was also nice because if you’ve ever had a puppy before you know that part of the challenge of puppies as they go everywhere and they can get into things, and so knowing which floor she was on was very helpful at that time. So we continued to do that, carry her up and down the stairs, and that was great.

Here’s what’s interesting. This dog is wicked smart, right? Sometimes she looks at me and just says, “Oh, I could run your world if I just had thumbs. Right?” She does. She is just incredibly, incredibly smart. It was interesting just a few months into having her, she was doing all these feats of incredible intelligence, but probably about six months, seven months into having her, she was almost full-grown in body size, so wildly capable to go up and downstairs.

She must protect them. She must be with them. She must guide them and walk with them at all times. They blasted down the stairs and she stood at those stairs rocking back and forth. You could hear her like, “Uh, uh.” It’s funny, I’m sure it had happened before that, but I’d never really thought of it that hear her two favorite or two of her three favorite people because Melissa, my wife is absolutely her favorite, but two of her favorite people were at the base of those stairs, stairs she was more than fully capable of going up and down, but she was absolutely convinced she could not. She stood still. She stood at the top of those stairs, just transfixed, locked and could not, in fact, go down the stairs.

Here’s the thing, this wildly intelligent dog had learned something that was incredibly incorrect, and that was that she was incapable of going up and down those stairs. Now, what’s interesting is that she thought that she was incapable because people had helped her, and therefore she thought that maybe she wasn’t able to like she wasn’t equipped to go down those stairs even though all she needed to do was do what? She just needed to take one step and she would have figured out that those stairs were just like every other stair, the stairs of the school, the stairs of the park, the stairs at my parents’ house, but she was absolutely convinced, absolutely convinced that she could not do it.

Sometimes we should just take that step and that’s all it takes is just finding that one small step to break through, right. To make that phone call, to do a little bit of research, to sign up for that class, to invite her out on a date, whatever that is for you, right? To make that appointment, to ask for that meeting, take that small but significant step and breakthrough because that’s oftentimes that’s all you need. I look back so often and think, “Oh my gosh, all I had to do was take that one step and then things started to happen. Things started to click, doors started to open.” It’s not because it’s always easy, but because we needed to just take that one step.

I’m reminded, I was reminded this past week a couple of different times of a quote that I love. I did a little bit of research, it’s given credit as being a Chinese proverb and that is that “You are most tempted to give up when you are on the brink of a breakthrough.” Now I think I may have modified that, I may have metrified that a little bit, but have you ever felt like that? Like you were almost there, right? I always say that oftentimes a breakthrough looks a lot like a brick wall, but you have to take that step. You have to punch through and realize that most of those brick walls in our mind are actually paper mache and we can break through them just by taking that step.

So I’m not sure where your brain is screaming at you, “I can’t. I can’t. I can’t,” especially when it comes to thinking about this year and where you want to be in one year from now. I’m guessing there might be an I can’t in there somewhere trying to hold you back. My encouragement to you this week is to simply say, “Well, maybe I can’t, but what’s one small step that I could take right now?” Then take it and see where it goes. See where that step takes you.

I can’t wait to hear where all of this takes you. As you break through those cant’s, share them with me, because I want to hear your success stories. I want to hear how you apply this. I want to hear about those small but significant steps that you’re taking so that you can dream bigger, think better and do more of what you are put on a planet to do. All right? Let me know. I can’t wait to hear from you and I can’t wait for you to hear some of these upcoming episodes too. They’re going to be amazing. Look at us, we’re in under 15 minutes. I thought I couldn’t, but I did and you helped me. Thank you so much. Thanks for being in this together and we’ll talk soon.

What’s something small but significant you want to start doing? Leave a comment and let me know! I can’t wait to hear from you!