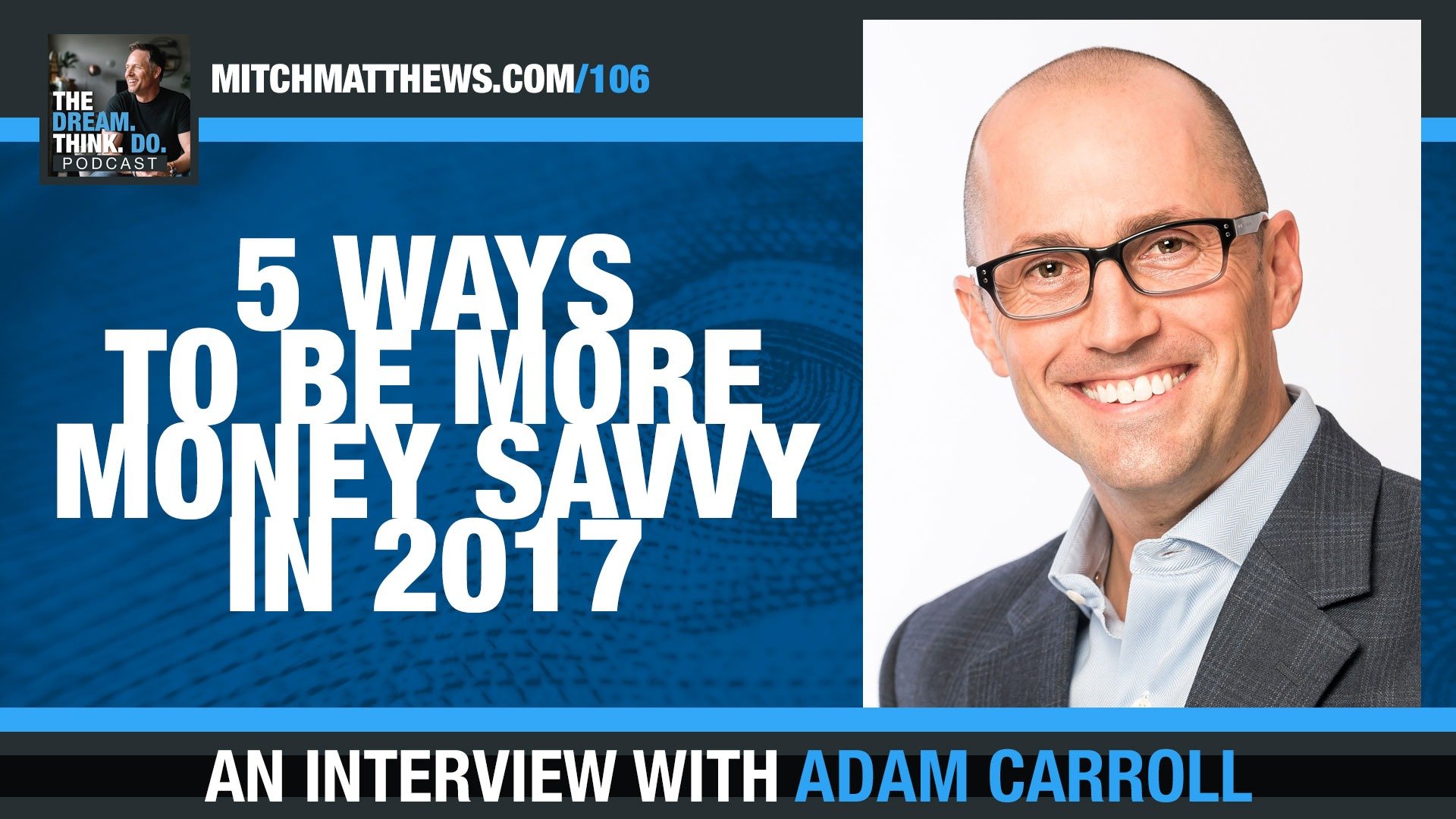 Internationally recognized financial expert Adam Carroll was on the show a few years back, but now he’s just released his latest book, The Money Savvy Student. With that in mind it was time to check in with him again and find out what is happening with his career and what drives his popularity. His previously successful books, Winning the Money Game, and 30 Days to 1K, are still selling well and the new one is expected to enjoy the same kind of success. As well, he’s recently released a long awaited documentary, Broke, Busted, and Disgusted, to be broadcast by CNBC.

Adam Carroll: Know Your Numbers
After the holiday spending most people realize they have overspent and that it is time for some belt-tightening and penny-pinching. The realization that they have plenty of debt makes them remorseful and tight-fisted. But financial expert Adam Carroll cautions about being too quick to zip up your wallet. “I want you to buy one more thing before you pull in the reins,” advises Carroll. “I want you to spend seventy-nine cents on a spiral-bound notebook and write down everything you spend on a daily basis, whether it’s $1.19 for a pack of gum or $1.89 for a soda.” Carroll believes that most of us tend to spend much more than we estimate. The act of writing in the notebook is geared towards bringing your spending into consciousness, because most people do it unconsciously. Know what is coming in, and know what is going out.

Post-Holiday Purging
There is a tendency to overindulge over the holidays not just with food, but with gifts, giving as well as receiving. “Your house seems like it got smaller because of all your new stuff,” jokes Carroll. In the Carroll household, they use January and February to purge what they no longer want or need, by donating or selling unnecessary items. Craigslist could become your best friend during this period. In his book, 30 Days to 1K, Carroll walks through the steps and shows how it can pay off. If you read just one chapter a day for 30 days, you will finish the book in a month, you’ll be rid of a lot of unnecessary items, and you’ll have money to show for it.

The Money-Savvy Student
The Money Savvy Student was mostly written for high school and college kids. Carroll spends a great deal of time talking to assemblies in schools, enlightening teens and young adults about how they can take control of their financial future and avoid paying off student debt for decades.

A teacher in Texas gave students an assignment to write down every article of clothing they were wearing and assign a price to it. Then, every bit of food they would eat that day, and assign a price. Those numbers were to be multiplied by seven days of the week, and then by fifty-two weeks for the year. He then reminded them that was just the bare bones of survival. They still had to add in glasses, braces, sports equipment, cell phones, surgeries, extra-curricular activities, etc. When one of the students asked why he gave them that assignment, he replied, “So you will know how expensive you are.” It is estimated, Carroll says, that it costs about $250,000 to $300,000 to raise a child to the age of eighteen. Apparently some of the students took the assignment to heart and had a change of attitude towards their parents. The teacher reported that after he gave that assignment, parents dropped by to give him a hug and say they didn’t know what he did to their child in class, but they just wanted to say thanks. Carroll believes that the sooner kids understand what it costs to live, the sooner they can succeed financially.

The Story of Carlos
Carlos is a first generation American of Cuban descent. When he turned fifteen, his parents, wanting him to learn to be financially responsible, told him that they would provide only food and a roof over his head. Instead of buying things for him they gave him a budget and handed over the cash. He then was responsible for stretching that money for all of his needs. He had to buy his own toiletries, clothing, cell phone, and anything else he thought he needed. Instead of getting a cell phone on his parents’ plan like his friends did with their folks, he chose a pay-as-you-go phone. When he wanted to wear a certain brand of jeans like his friends, he did. But he learned to find them at the thrift stores and paid a fraction of the price they did. He may have felt deprived at the time because his parents didn’t hand everything to him that he wanted, but he learned an invaluable lesson about how to be financially responsible and resourceful.

So, it’s ten years later. How is Carlos doing now? “He put himself through college, debt-free,” says Carroll, “and he owns 11 rental properties that provide him enough passive income to live comfortably.” To what does Carroll attribute Carlos’ success? “He was successful because he was given the opportunity to fail in small doses. When they learn from those failures and we are there to coach them, it’s transformative. If you give them the opportunity to fail in massive quantities, it is deformative. They get deep in debt and don’t know what to do.”

Broke, Busted and Disgusted
Carroll was inspired to create a full-length documentary film about student loan debt. It would help a lot of kids and their parents, but it would be costly to produce. He managed to crowd fund $67,000 in 45 days to make his labor of love. The film is titled Broke, Busted and Disgusted. He’s shown it to students in high school, colleges, and universities across the country. Carroll recently signed a contract with CNBC to debut the film on Netflix. From January through December of 2017 it will also be available to view online at CNBC.com.

The Autographed Book Giveaway
Adam Carroll will give away autographed copies of his new book, The Money Savvy Student, to five randomly chosen winners. Share this podcast episode on social media and include the hashtag #moneysavvy to be included in the drawing.