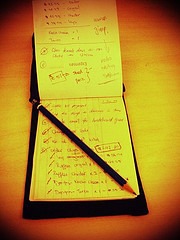 Okay… so we’re continuing on with our busting through the “bright and shiny object syndrome” and getting ‘er done a week!

We’ve talked about starting the day with a plan and giving ourselves some grace when those plans go awry.

So much so that when I do something that’s not on my list… there’s a very good chance that I’ll write it down… just so I can check it off.

(Anybody care to admit that they do the same thing?)

But… it helps me to stay on track during some crazy days!

Now, A LOT of people have talked about the best ways to do a to-do list and there are a whole LOT of great ideas.

So, I’m simply going to submit the way that I do my to-do list… in this season.

It may seem like I have a couple of extra steps, but the system really works for me. And as I’ve talked with other “creatives,” it’s helped them too.

Simply put… I combine technology with old-school know how.

I have an iphone, so I added an app that helps me to keep track of my to-dos electronically.

My app of choice (and I’ve tried a lot of them), is… Things. It’s not cheap but at the same time… I’ve found it to be priceless to have my ever-growing, ever-changing to-do list captured on my phone and on my mac.

So… yes. I use technology.

BUT… I also encorporate an old-school approach.

Here’s my next step…

I assign each task a day in which I’m going to try to do it. Then I print that list off and carry the list with me in a simple notebook. (Sometimes I even tape the list to a page in my notebook.)

That may seem like a wasted extra step but there’s some method to my madness. Here are some quick reasons:

Sure… printing off the list may seem like an extra step… but merging the new and old has helped me to better capture and control the overwhelming flood of ideas and tasks that can hit on any given day.

That’s my weird but somewhat simple approach to my to-do list.

If you have something different and/or better… leave us a comment and let us know what works for you!

Let’s keep rolling with this… and let’s see what we get done this week!