A story about getting clear & asking 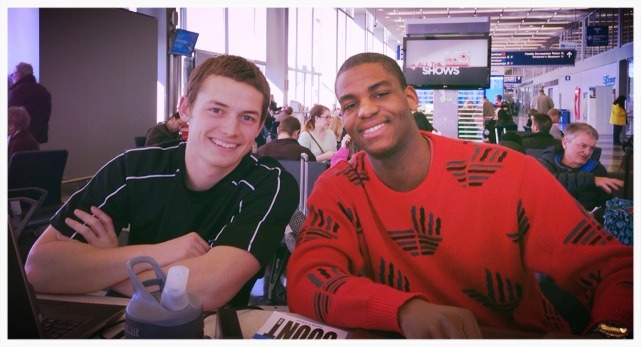 11 Sep A story about getting clear & asking

A story about getting clear & asking

I’ll admit it.  I have kind of weird life.

BUT… from this vantage point I get to see some pretty cool things and I get to learn some pretty amazing life lessons along the way.  This little story is NO exception and I had to share it with you.

Last winter I was traveling to speak at a Delta Sigma Pi conference in Rochester, NY.

As I was waiting for my connecting flight at Chicago O’Hare, I met J.T. and Clifford, two freakishly awesome students from Miami University.  As we sat at our shared table in front of our gate we started to talk and figured out we were headed to the same conference.

It didn’t take too long for me to start asking about the kind of work they’d love to do.

In fact, it was that simple.

I just asked, “So what kind of work would you love to do?”

It was obvious that they’d thought about a lot of things in relation to their careers… but I don’t know that anyone had ever asked them about work they’d love to do.  Sure.  I’m betting they’d thought about work they “should” do based on their major.  Maybe they’d even explored work they “could” do based on markets and economics.  But yeah… I don’t know if they’d ever given themselves permission to think about something they’d love to do.

Within a minute or two… Cliff said he had always been interested in commercial real estate and thought he might really love that.  Although he was pretty soft-spoken, his eyes lit up as he talked about some of the things that drew him to the idea.

I felt honored to hear about it.  I think J.T. did too.

Then I took it a step further.

I simply asked, “So where would you love to live?”

He thought about it and named off a few areas, but Atlanta was at the top of his list.

He quietly but confidently said, “Yes.”

Then I asked, “Who could you ask for help on this?”

He said, “I’m not sure.  I don’t think I know of anyone with those kinds of connections.”

I said, “I understand.  But you’ll never know if you don’t ask around.”

Then I took a bit of a risk.

I said, “What if we just started asking people about it?  We’re headed to a conference this weekend that’s going to host students from all over the East side of the country.  Maybe there’s someone there that might know somebody.”

I continued, “Do you think there are any of your friends that might have connections there?”

He said, “I’m not sure but I could ask.  I guess I’ve just never asked.  I’ll start asking around when I get back to campus.”

Then I got hit with a bold idea.  I cringed just a little bit as I heard the words escape my own mouth.

I said, “Why wait?  Let’s try an experiment here.”

He looked at me a little surprised, but said “Okay.”

I turned to a businesswoman that was sitting at our table.  She was waiting for the same plane and had jumped in and out of our conversation as we had been chatting.  As I looked to her she happened to look up from her laptop.

I said, “My new friend Clifford just told me that he thinks his next dream job involves commercial real estate in Atlanta.  Do you happen to know anyone in Atlanta?”

I have to admit I was just hoping she’d know someone in that area, but as a huge grin came across her face I began to think she might have something more.

She said, “I can do better than THAT!  I actually have a friend IN Atlanta who is IN commercial real estate.  I’m betting he would at least be open to talking with you!”

And with that, she handed Cliff her business card and said, “Seriously.  If you follow up with me, I will help you connect with him.”

We were all blown away but our little “experiment” had worked!  (To be honest, we all just about fell off our stools!)

Moments later they started loading the plane and we all boarded with big goofy grins on our faces.

Fast forward to the fall.  I went to speak at Miami University.

While I was there Clifford and I were able to reconnect!

As it turned out, Cliff let me know that he not only had connected with our fellow traveler’s contact in Atlanta but he’d scored an internship with him!  That’s right!  Clifford had spent the entire summer living IN Atlanta working IN commercial real estate!

What’s also exciting was that Clifford was able to figure out that he loved certain aspects of the business and didn’t like other aspects.  So his internship and his time in Atlanta had helped him to further clarify the dream and set a new course with specifics!

I was blown away by… elated for… and proud of Cliff.

So here’s a life lesson that I learned from Cliff’s story.

There’s so much power in not only getting clear on your goals and dreams but it’s also so important to verbalize them.  (You just never know who might be able to help you out.)

In Clifford’s case… he’d thought about getting a “job” but he’d never really given himself permission to dream about doing work he might love… and live in a place he would love to live.

Just as importantly, he’d never really shared those dreams with anyone.

But once he did… pretty amazing things happened.

Now, I’ll be the last one to tell you that this kind of rapid turn around ALWAYS happens.  It doesn’t.  And heck, I’ll even say… DON’T ALWAYS TALK TO STRANGERS AT AIRPORTS.

But… sometimes really cool things happen when you get clear and ask.

What’s something Cliff’s story says to you?  Join in the conversation and let me know.