345: 3 Surprise Gifts from the Manger 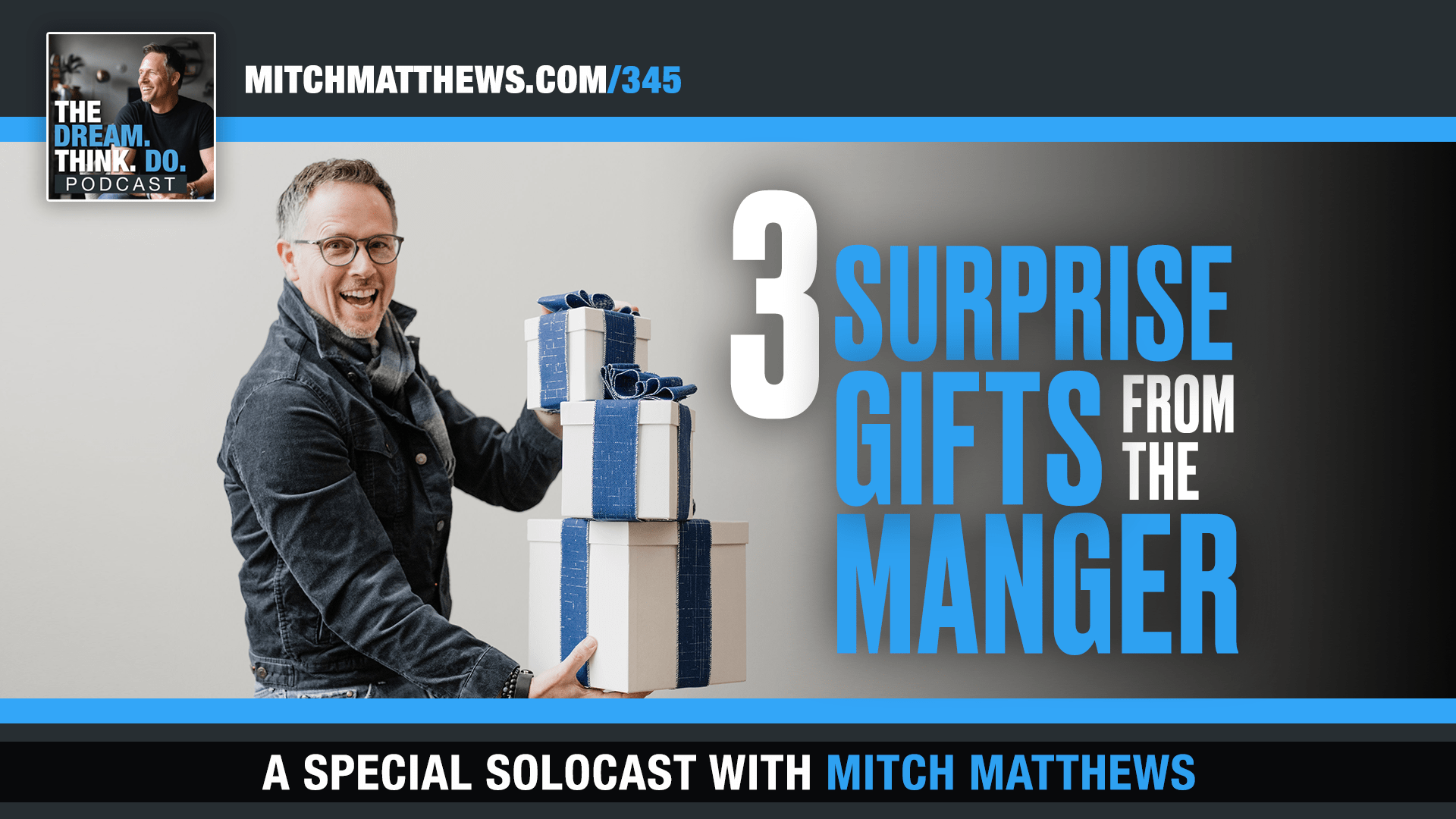 We’re doing a DEEP DIVE this week on 3 surprise gifts from the Manger story.  That’s right!  You and me.  We’re talking about a story that may feel “familiar,” BUT there’s a danger when something feels familiar… right?

The danger is that we might tune out or we may miss some of the surprise gifts that can still be tucked inside.  I was reminded of this recently when I was asked to teach on the shepherds from the Nativity story and the birth of Jesus.  Specifically, I was asked to dig into Luke 2:8-18.  As I did… and I went deep…

I uncovered some elements I’d never seen or thought about before… even though it was a very familiar story.  And wow… they were good surprises.  Whether you’re a big fan of reading the Bible or not… this episode has something for you.

At the VERY least… you’ll hear some things you can use to impress your friends at Christmas parties!  But… if you listen in and stay open… I think you might really appreciate unwrapping these surprise gifts as much as I did!  So let’s get to this!

This post helps to explain some of why I believe what I do: mitchmatthews.com/our-6-miracle-story/

Melissa (my bride) joins me and we talk about some fun prayer stories: www.mitchmatthews.com/207

I talk about 3 Keys to Having Your Best Holiday Season Yet: www.mitchmatthews.com/105

MORE ABOUT THE 3 SURPRISE GIFTS FROM THE MANGER EPISODE:

We’re diving into a familiar (awesome) story from Luke 2:8-18.  Yup.  We’re talking about the Shepherds from the Nativity story and the birth of Jesus.  Here are the specific verses we’re referring to from the New Living Translation (emphasis added):

The Shepherds and Angels

That night there were shepherds staying in the fields nearby, guarding their flocks of sheep. Suddenly, an angel of the Lord appeared among them, and the radiance of the Lord’s glory surrounded them.

They were terrified, but the angel reassured them. “Don’t be afraid!” he said. “I bring you good news that will bring great joy to all people. The Savior—yes, the Messiah, the Lord—has been born today in Bethlehem, the city of David! And you will recognize him by this sign: You will find a baby wrapped snugly in strips of cloth, lying in a manger.”

Suddenly, the angel was joined by a vast host of others-the armies of heaven—praising God and saying,  “Glory to God in the highest heaven, and peace on earth to those with whom God is pleased.”

When the angels had returned to heaven, the shepherds said to each other, “Let’s go to Bethlehem! Let’s see this thing that has happened, which the Lord has told us about.”

They hurried to the village and found Mary and Joseph. And there was the baby, lying in the manger.

After seeing him, the shepherds told everyone what had happened and what the angel had said to them about this child. All who heard the shepherds’ story were astonished…

In the episode, I also refer to one of my other favorite stories from the Bible. It’s the story of David and Goliath.  Now, THAT is also a “familiar” story… so it might be easy to dismiss.

But trust me… it’s stories like this that kept those Shepherds (and us) inspired and OPEN to the crazy cool stuff God was going to invite them into.

And since I’m referring to elements of it in the episode, I’ll include the full story here too.

Now David was the son of a man named Jesse, an Ephrathite from Bethlehem in the land of Judah. Jesse was an old man at that time, and he had eight sons. Jesse’s three oldest sons—Eliab, Abinadab, and Shime—had already joined Saul’s army to fight the Philistines.

David was the youngest son. David’s three oldest brothers stayed with Saul’s army, but David went back and forth so he could help his father with the sheep in Bethlehem.

For forty days, every morning and evening, the Philistine champion strutted in front of the Israelite army.

One day Jesse said to David, “Take this basket of roasted grain and these ten loaves of bread and carry them quickly to your brothers.

And give these ten cuts of cheese to their captain. See how your brothers are getting along, and bring back a report on how they are doing.” David’s brothers were with Saul and the Israelite army at the valley of Elah, fighting against the Philistines.

So David left the sheep with another shepherd and set out early the next morning with the gifts, as Jesse had directed him. He arrived at the camp just as the Israelite army was leaving for the battlefield with shouts and battle cries. Soon the Israelite and Philistine forces stood facing each other, army against army.

David left his things with the keeper of supplies and hurried out to the ranks to greet his brothers. As he was talking with them, Goliath, the Philistine champion from Gath, came out from the Philistine ranks. Then David heard him shout his usual taunt to the army of Israel.

As soon as the Israelite army saw him, they began to run away in fright. “Have you seen the giant?” the men asked. “He comes out each day to defy Israel.

The king has offered a huge reward to anyone who kills him. He will give that man one of his daughters for a wife, and the man’s entire family will be exempted from paying taxes!” David asked the soldiers standing nearby,

“What will a man get for killing this Philistine and ending his defiance of Israel? Who is this pagan Philistine anyway, that he is allowed to defy the armies of the living God?”  And these men gave David the same reply. They said, “Yes, that is the reward for killing him.”

But when David’s oldest brother, Eliab, heard David talking to the men, he was angry. “What are you doing around here anyway?” he demanded. “What about those few sheep you’re supposed to be taking care of? I know about your pride and deceit. You just want to see the battle!”

“What have I done now?” David replied. “I was only asking a question!” He walked over to some others and asked them the same thing and received the same answer. Then David’s question was reported to King Saul, and the king sent for him.

“Don’t worry about this Philistine,” David told Saul. “I’ll go fight him!”  “Don’t be ridiculous!” Saul replied. “There’s no way you can fight this Philistine and possibly win! You’re only a boy, and he’s been a man of war since his youth.”

But David persisted. “I have been taking care of my father’s sheep and goats,” he said. “When a lion or a bear comes to steal a lamb from the flock,  I go after it with a club and rescue the lamb from its mouth. If the animal turns on me, I catch it by the jaw and club it to death.

I have done this to both lions and bears, and I’ll do it to this pagan Philistine, too, for he has defied the armies of the living God! The Lord who rescued me from the claws of the lion and the bear will rescue me from this Philistine!”

Saul finally consented. “All right, go ahead,” he said. “And may the Lord be with you!”

Then Saul gave David his own armor—a bronze helmet and a coat of mail. David put it on, strapped the sword over it, and took a step or two to see what it was like, for he had never worn such things before.

“I can’t go in these,” he protested to Saul. “I’m not used to them.” So David took them off again.

He picked up five smooth stones from a stream and put them into his shepherd’s bag. Then, armed only with his shepherd’s staff and sling, he started across the valley to fight the Philistine.

Goliath walked out toward David with his shield-bearer ahead of him, sneering in contempt at this ruddy-faced boy.

“Am I a dog,” he roared at David, “that you come at me with a stick?” And he cursed David by the names of his gods. “Come over here, and I’ll give your flesh to the birds and wild animals!” Goliath yelled.

David replied to the Philistine, “You come to me with sword, spear, and javelin, but I come to you in the name of the Lord of Heaven’s Armies—the God of the armies of Israel, whom you have defied.

Today the Lord will conquer you, and I will kill you and cut off your head. And then I will give the dead bodies of your men to the birds and wild animals, and the whole world will know that there is a God in Israel!

And everyone assembled here will know that the Lord rescues his people, but not with sword and spear. This is the Lord’s battle, and he will give you to us!”

As Goliath moved closer to attack, David quickly ran out to meet him. Reaching into his shepherd’s bag and taking out a stone, he hurled it with his sling and hit the Philistine in the forehead. The stone sank in, and Goliath stumbled and fell face down on the ground.

We’re going to talk about 3 surprise gifts.  And as you’ll hear… I needed them, and you might too!

NOTE: If history is your jam… and you’d like to dig into more of the historical dialogue around the manager that I mention, you can click here and here and here to start THAT journey.

If you go down this trail… enjoy!  Heck… nerd out!  My encouragement is that as you dive deeper into the information… it builds your sense of awe and wonder around the humble beginnings of Jesus’ entry into this world as well as the very tangible historical aspects of this amazing story.

I want to hear from YOU!

What do YOU think?  What resonated with you?  Which gift (question) did you need?  Where could you apply one of those questions… this week?  Let me know because I’d LOVE to hear from YOU!

And hey… if it clicked with you… please share this episode with a friend!