3 Strategies for your BEST Holiday Season… ever! 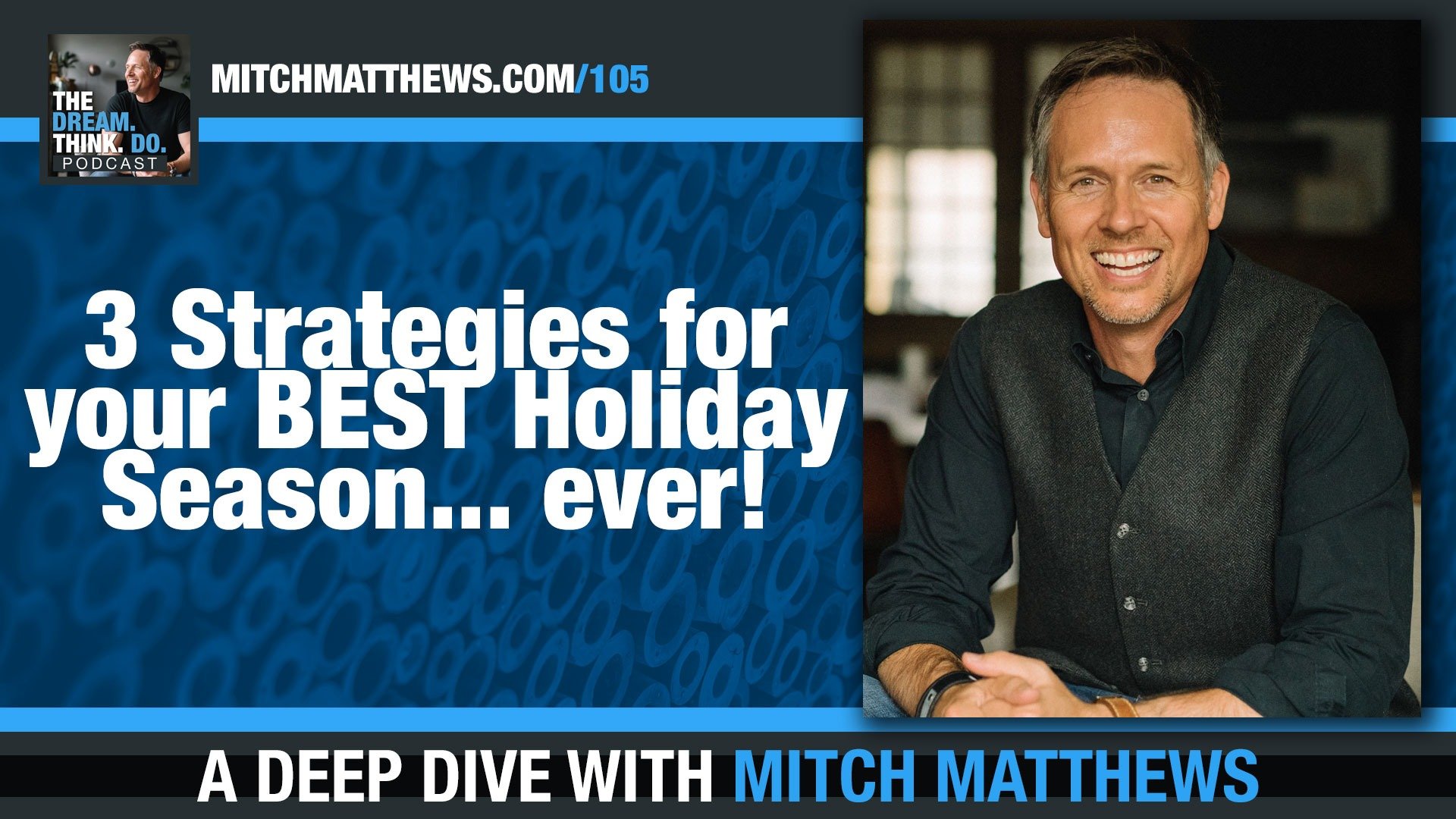 21 Dec 3 Strategies for your BEST Holiday Season… ever!

Posted at 05:00h in Dream. Think. Do. by Mitch Matthews 2 Comments
0 Likes
Share

Mitch Matthews dives into his three favorite strategies for your best holiday season ever.

Each strategy is posed in the form of a question that only YOU can answer.

By using these strategies in your own life, you will be able to experience this holiday season with more joy, peace, and fun.

Question #1 – What Can I Be Grateful for in This Moment?

The first to admit that the holidays can sometimes be tough, Matthews remembers one from six years ago. He was struggling with his business and money was in short supply. Pulling his pickup into the Target parking lot, his intent was finding gifts for the family. He and his wife had already discussed postponing gifts for each other until after the holidays, but he still needed to buy for the family. As he swept through the doors, Christmas carols were playing, and cheery holiday decorations adorned the store. He wanted more than anything to be able to provide for his family, give great gifts, and make it a magical season. Instead, all he felt was a heavy sadness. He couldn’t bear it. Turning around, he headed back through the doors, straight to his truck. As he watched shoppers emerge from the store, their faces reflected joy or worry. Only one word described how he felt: broken.

Not wanting to let his family down, he had to do some speedy inner coaching to get his thinking straight. He knew right away what to do. He asked himself one of his favorite questions: “What can I be grateful for in this moment?” He wasn’t feeling much gratitude, so he started with something basic. “One of the simplest things was the truck I was sitting in,” he recalls. “It was warm, it was running, and had gas in the tank.” He realized that he and his family had their health, and a few gifts to give. Absolutely nothing had changed except his attitude and yet he drove off feeling so much better.

“There is actually some science behind this question,” says Matthews. A study was done with a group of acknowledged worriers. They were split into two groups, and blood tests were done to measure serotonin and dopamine levels to establish a baseline. There was no medication involved, but the “treatment group” was asked to write down two or three things every day, think about them, and feel gratitude for them. After one month their serotonin and dopamine levels increased, and they reported feeling happier, less depressed, more creative, and sleeping better. Tests were done monthly for six months. After that, they were advised to stop the “treatment”. A month later they tested their blood one more time. The levels remained improved. The control group remained as they began, with no improvement in serotonin or dopamine levels. Researchers concluded that the treatment group had retrained their brains to look at the world differently.

Question #2 – What Is Something I Don’t Want to Miss?

This time of year is hectic. There are so many commitments, gatherings, parties, and extra social events that it is easy to miss some things. You can even be present for an event, but miss it. Matthews says, “You can be there, boots on the ground and still miss something.” Matthews confesses he is a recovering perfectionist, trying to make every Christmas for his family look like a “Hallmark movie.” For him, the best part of the holiday season is Christmas Eve at home with his wife and children. That is top on his list of “I don’t want to miss.” He goes to extraordinary measures to make sure he can “be fully present in this moment.” He sets phone alarms to remind himself, or checks with his wife and asks her, “Am I in the moment?” He has gone so far as to set up accountability agreements with family and friends, just to keep himself on track. It works and has increased the holiday joy factor for him.

Question #3 – What Is Something Good That Could Be Around the Corner?

Since 2002 Matthews has worked coaching people in achieving their dreams, and he knows the pitfalls of having big dreams. “Sometimes dreaming big can also mean worrying big,” he says. “Joy stealers and worries can often be amped up over the holidays.” One of Matthews’ friends is Bear Grylls, the adventurer and survivalist. Bear is no stranger to worries or fear in his extreme adventures. When asked how he manages them he told Matthews that the most important thing isn’t your circumstances, but your mental state. If you lose hope, you’re done. His response prompted Matthews to formulate question #3. “If there could be something good ahead,” says Matthews, “then you’re willing to push forward and break through.”