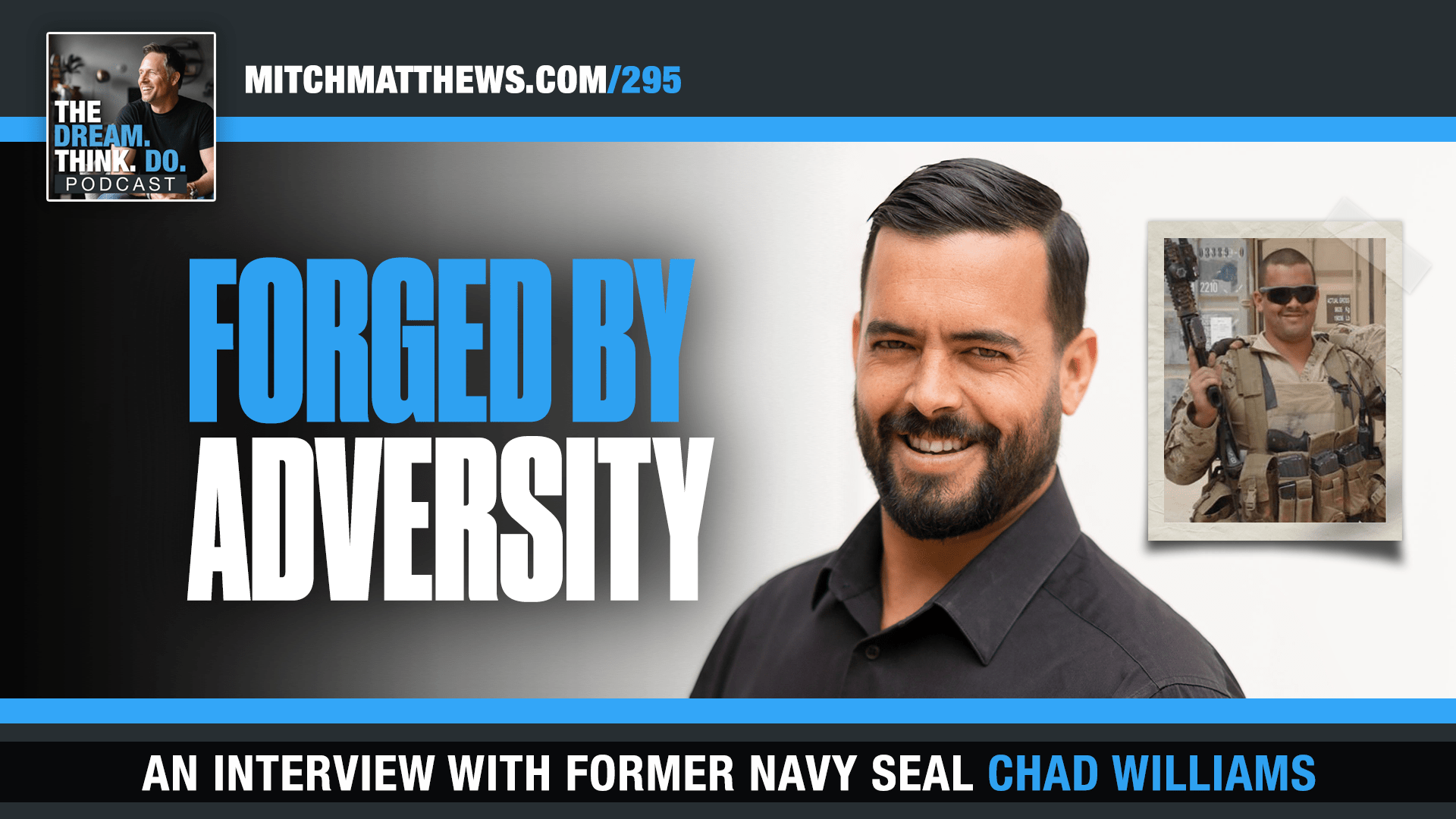 Chad Williams is our guest.  Chad is a former U.S. Navy SEAL. Now he’s a speaker and a best-selling author.  Days before Chad was to report to military duty, he turned on a television and was greeted with the horrifying images of his friend and mentor, US Navy SEAL Scott Helvenston, being brutally murdered in a premeditated ambush on the roads of Fallujah.

This would have convinced most people to bail, but instead, it inspired him to double down on his dream of becoming a NAVY Seal too.  So Chad followed in Scott’s footsteps and completed the US military’s most difficult and grueling training to become a Navy SEAL. He was one of only 13 from a class of 173 to make it straight through to graduation.

After that…  Chad served his country on SEAL Teams One and Seven… completing tours of duty in the Philippines, Saudi Arabia, Bahrain, and Iraq.  We’ll learn how his NAVY Seal training now helps him as he leads others, how he lives his life, AND how he THRIVES even in a year like 2020!  Let’s get to this!

MORE ABOUT THE CHAD WILLIAMS EPISODE:

After completing his 6 years of service as a NAVY Seal, Chad went on to author the best-selling book SEAL of God.

Today, Chad has spoken at fortune 500 companies… as well as hundreds of faith-based events around the country.  He also contributes no holds barred… expert analysis related to military affairs and subjects of leadership and perseverance for major news networks… like FOX and CNN.

Chad has… and continues… to live a DREAM THINK DO life and I’m so excited and honored to get to have this conversation with him.  PLUS… I wanted your input on the questions I should ask… and you guys sent in suggestions like crazy… so I can’t wait to get to ask some of YOUR questions too.  So we’ll also go after the following questions submitted by YOU!  Questions like:

“What kind of techniques or mental thought patterns he learned to switch from being overwhelmed by circumstances to being able to focus on doing the things that he could control?” – Julie and Dan

“There’s a lot of focus on self-motivation and self-perseverance in striving to achieve our DREAM. We all know SEALS are a Team, and building a team is part of success, so how do we keep our team motivated when we’re so busy doing what we need to do?”   – Jeffrey Jorgenson

“What’s a take-away from your time as a Navy Seal that you apply to your life every day?” – Stephanie

CHAD’S FAVORITE QUOTE (which he nails in the interview):

“It is not the critic who counts; not the man who points out how the strong man stumbles, or where the doer of deeds could have done them better. The credit belongs to the man who is actually in the arena, whose face is marred by dust and sweat and blood; who strives valiantly; who errs, who comes short again and again, because there is no effort without error and shortcoming; but who does actually strive to do the deeds; who knows great enthusiasms, the great devotions; who spends himself in a worthy cause; who at the best knows, in the end, the triumph of high achievement, and who at the worst, if he fails, at least fails while daring greatly, so that his place shall never be with those cold and timid souls who neither know victory nor defeat.”

Okay, so what did YOU think of what Chad Williams had to say?  Which stories resonated?  What phrases and mantras got you thinking?  What clicked for you?  What didn’t?  What’s going to be something you try/apply as a result?  Let me know.  Leave a comment below.  I can’t wait to hear from YOU!