A 6 Word Phrase To Help You Beat Comparison 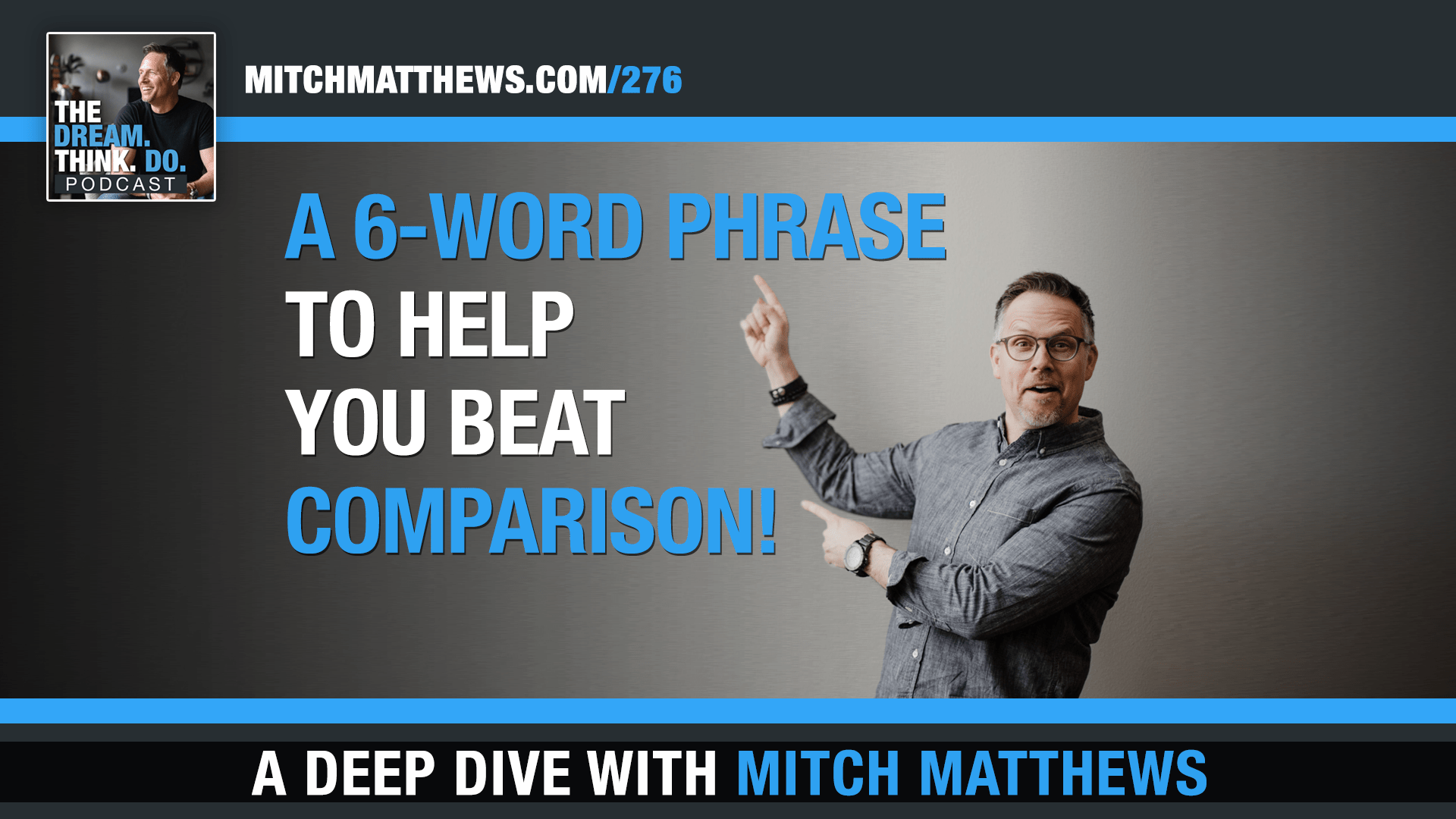 09 Jul A 6 Word Phrase To Help You Beat Comparison

This week we’re talking about overcoming COMPARISON!  Seriously, have you ever opened up your social media app… you scrolled… scrolled… and then WHAM!  It hits you… that wave of COMPARISON. Those feelings of: “I’m behind,” or “I’ve missed it” or “I’m too late” or “I’m not as ________ as them.”  Here’s the deal.

I think comparison kills more dreams and big ideas than just about anything else.  And THAT is why we’re going after it this week.  I’m going to get you a six-word phrase that’s helped set me and my coaching clients free from the “comparison trap!”  (Plus, I’ll give you the fun story of when and how it hit me!)  So… if you’re wanting to bust free from the weariness that comes from comparison… I’ve got your back!  Let’s do this.

MORE ABOUT THE EPISODE:

Recently, I was working with one of my coaching clients.  He’s an entrepreneur working on a new project.  It has the potential to be big… really big.  But part of it is going to involve him having more of a social media presence.  This has caused him to look at what other people are doing which sparked a conversation about feeling those pangs of “comparison.”

You know those feelings that can sometimes come when you see other people doing something or achieving something that you want to do or experience.

I could totally relate.

I can totally relate.  In fact, I had a similar experience when I was asked to be on stage at a big conference.  I knew some of my heroes from the speaking world were going to be there too.  People like Brendon Burchard, Jack Canfield, and Les Brown.

Once I was there, I got to see them in action on stage.  Plus, I was able to connect with them backstage too.  I’ll admit those inner-voices of comparison started to weasel their way into my thinking. I started to have doubts.

It helped me to stay out of comparison and instead… it enabled me to take in the gold the speakers were sharing… as well as take in the full experience and learn from the whole situation.

I can tell you this phrase has helped me so much since too.  Any time when I’m moving into comparison mode.  You know those times when you’re:

If I feel that comparison starts to creep in… I remind myself of the phrase and it makes all the difference.  Are you ready for it?

“Learn from instead of comparing to.”

Such a simple phrase but it makes a huge difference.

There are three elements to this phrase.  Let’s break it down.

The first part is “Learning FROM.”

When we focus on “learning from,” our brain stays out of the “comparison trap.”  Instead, it starts to search for those things that we could do to improve our own lives… our skills… or our performance.

When we stay in “learning” mode… we’re much more likely to light up our brains.  We experience things like endorphins and serotonin because we can feel growth, hope, and even gratitude.  And these have a self-perpetuating effect… right?

Because when we feel GOOD about the growth… about the development… about the learning… we tend to look for MORE.  Which of course creates more endorphins and serotonin!  It’s such a natural high!   It’s so good.

But let’s look at the second element of the phrase:

Okay… the phrase is: Learning from INSTEAD of comparing to.

Now, we’re going to focus on the word “instead.”

Notice I’m not using the word “not.”

The phrase is: “Learning from INSTEAD of comparing to.”

The phrase ISN’T “Learning from NOT comparing to.”

This is subtle but it’s key.  It’s a clutch!

Like we talked about in episode 213… In the episode on “Identity Statements,” our brain is not great at recognizing words like “don’t” or “not” in self-talk.

“I’m NOT going to think about food.”

Then a nano-second later it became:

“I’m NOT going to think about that meatball sub or that Oreo Blizzard or that pork tenderloin sandwich with mustard and pickles.”

And then… an hour later you were sitting right next to a pork tenderloin as big as your head.

What’s better is when we direct our brain to something better.  That’s why we use INSTEAD instead of don’t or not.  The phrase is: “Learning from INSTEAD of comparing to.”

Which brings us to the last part of the phrase:

LAST KEY: TURN IT INTO A QUESTION:

Now… if you want to take all of this to the next level, you can turn the phrase into a question.

If you feel yourself starting to move into comparison mode… try to ask yourself a question like:

And then you’re off to the races!  Your brain will engage and move even further into LEARNING mode, and as it does… get ready for a rush of the good stuff as endorphins and serotonin start pulsing through your brain… and the ideas and solutions start to flow even more.

I know this strategy had a big impact on me.  I was able to take the stage and deliver.  Plus, I had a great time!  I’m wildly blessed to say this strategy has REALLY helped my coaching clients too. All that to say… I hope you experiment with it too!

Because I want you to beat back comparison with a big stick!!!

Why?  Well… I know you’ve got big dreams… things you need to get out into the world… and comparison is one of those subtle killers of dreams.  And I want you to be totally equipped to overcome “comparison mode” so you can get after it and make those dreams a reality!