A Masterclass on Hard Conversations: Part 3 – What to do AFTER! 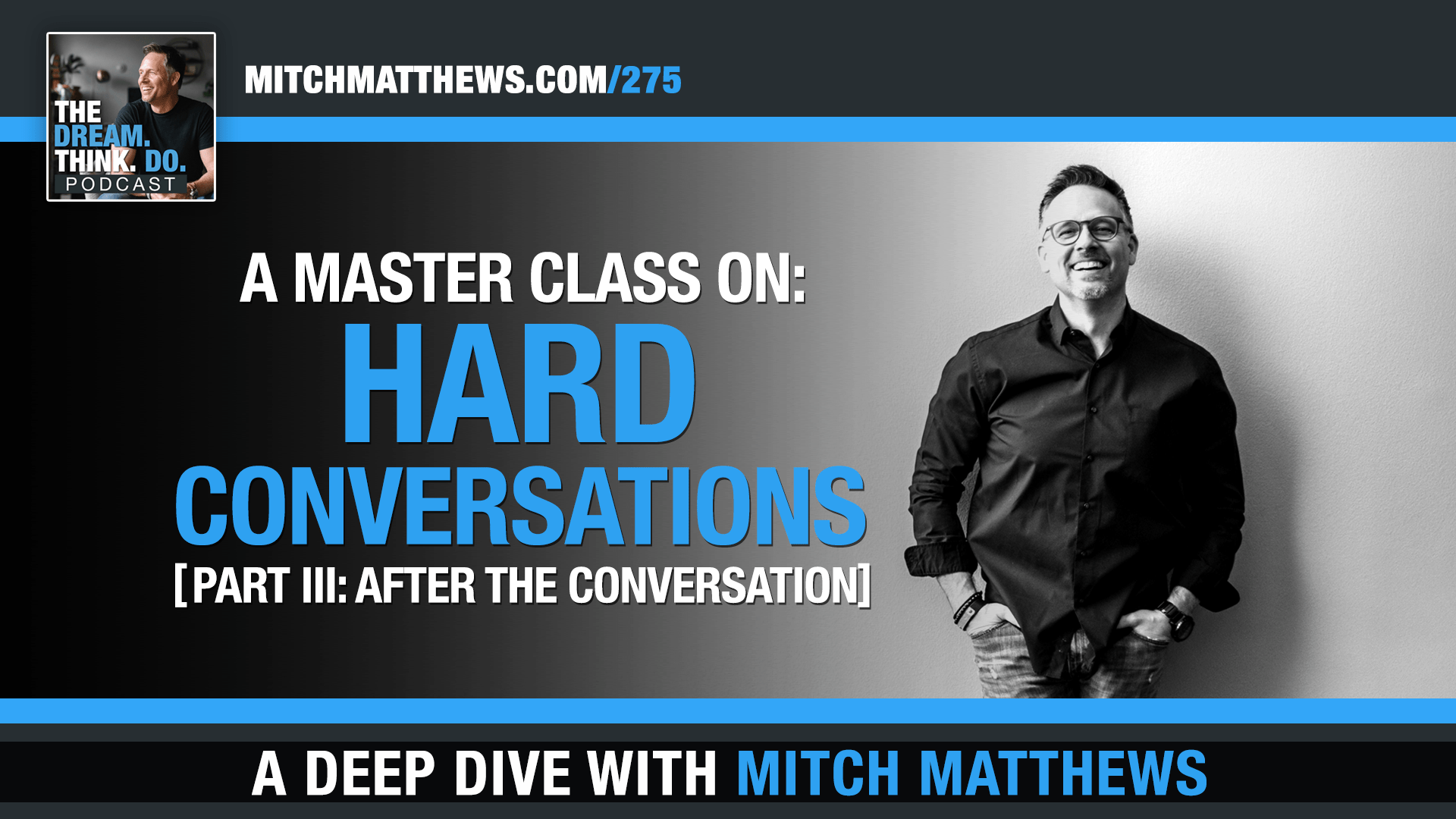 02 Jul A Masterclass on Hard Conversations: Part 3 – What to do AFTER!

We’re talking about what to do AFTER that difficult conversation.  Our first two episodes on the CRITICAL subject of having HARD (but RICH) conversations have been huge!  In fact, it’s led to some of our biggest download numbers of the year!  (Thanks for spreading the word!)  That means we’re hitting on a topic that people need right now.  That’s why we’re talking about what to do AFTER the conversation. I offer THREE tenets to live by in about 15 minutes.  Short and sweet. NOTE: The 2nd will help you to know what to do if you think you’ve offended someone.  (Because that’s a hard reality of our current era… right?)  BTW… the strategy might surprise you… but I think it will also help you to feel a sense of freedom too! So let’s get to it!

Marianne Williamson quote on honor and respecting each other:

“A healthy, vital society is not one in which we all agree.

It is one in which those who disagree can

do so with honor and respect for other people’s opinions…

and an appreciation of our shared humanity.”

If you’ve been listening to DTD for a while… you know I’m a Jesus guy and I love the Bible.

So I do my best to follow what I’ve learned from the Bible.  I sure don’t do that perfectly… but I’ve found that if I try to understand what’s in there… and know that God loves me… a lot… as I do… things seem to work out pretty darn well.  And I have a much better life.

Now I’m going to stop right there and acknowledge the fact that I may have thrown out something we may or may not agree upon… but I wanted to give you some of my own personal foundation for the first strategy.  (How about that for navigating difficult conversations!  HA!)

Here’s the deal… people were always asking Jesus about the rules… and laws. Sometimes He would offer stories and metaphors… other times He would offer different ways to look at things… sometimes He would raise the stakes and poke a little bit.  But in one particular interaction, someone was trying to set Jesus up… my hope was they were truly trying to learn… but some people think this guy was trying to get Jesus to say something that would get Him in trouble.  The question was: of ALL the commandments… of ALL the rules that we live by… which is the most important?

Can you imagine? It was a rules-based culture.  The rules were everything.  The people who memorized the rules were elevated… they were respected… they were feared.  The more rules you knew… the more power you had.  But Jesus did this wild thing in his response.

He said… Okay… of ALL the rules… the TWO most important rules are:

Love God with all your heart.  Love your neighbor as yourself.

Love God.  Love others.  Love yourself.

Now THAT is something I can remember.

Now you might be asking, “What does it have to do with difficult conversations?”

Now, here’s the thing.  Loving someone doesn’t mean acquiesce.  It doesn’t mean being a doormat.  It means being humble AND confident.

In fact, I like what Frank Turner from Qurora.com said about humility.

“To be humble is to not make yourself more important than others.

It is a state of mind that keeps you from thinking too much of yourself,

as well as keeping you from thinking too little of yourself.

If you are in “the right place,” then you are not arrogant, pushy, a bully, or many other negative things.

If you have humility, then you value others as much as yourself,

because you remember that they are people too.”

Humble confidence means to love your neighbor… and love yourself.

In the same vein, I really appreciate what Courtney Seiter, Director of People at Buffer.com offered on this subject.  She said,

“Genuine humility is a reflection of neither weakness nor insecurity.

Instead, it implies a respectful appreciation of the strengths of others,

a lack of personal pretension and

a more relaxed sense of confidence

Which brings us back to the phrase Nermine Zakhary offered in episode 274 (www.MitchMatthews.com/274)

She said that if she keeps “Confident Vulnerability” in mind she’s able to stay in the conversation and truly ‘hear’ someone without being combative.

The conversation may go the way you hoped… or it may not.  But deciding to love the person… before… during and after… can help you to not lose later on.  Because… I don’t know about you… but you might navigate a conversation… and not have it go the way you’d hoped… or not feel like you totally agree on something… and there’s a second wave of potential danger because you can have that conversation a thousand more times… without the person even there.  Can I get an amen?

You can start to analyze what you said… what they said… or what you could have said!  In fact, I remember a classic Seinfeld episode when George was in an argument at work and then he wound up analyzing that argument the rest of the episode… coming up with better comebacks!

It was funny because most of us can TOTALLY relate.

Which leads us to our second strategy.

SECOND TENENT: NEVER disrespect but be willing to disappoint.

Like we’ve said in Episodes 273 and 274, we want to honor and offer respect to anyone we’re having a hard conversation with… because as we do… that tends to inspire them to do the same… AND it often helps to provide a foundation for a much richer conversation.

BUT… sometimes… a conversation is not going to go the way someone expected… AND it might mean that you could disappoint someone.  So… what do you do if that happens?

Especially if you’ve ever wrestled with being a “people pleaser.”

If you can identify with that it might help to hear what Crystal Paine of MoneySavingMom.com said on this topic.  She offered a couple of specific suggestions to get clear on your next steps and to move forward with confidence.

ONE. Don’t Beat Yourself Up

When you find out that you’ve disappointed someone, don’t immediately beat yourself up. This NEVER helps.  Instead, commit to doing something about it… AND commit to thinking objectively.

TWO. Step Back & Consider Their Perspective

Ask yourself (or a trusted friend or family member):

If so… admit you’re wrong… which we’ll talk about in a second.

If not… you’ll need to determine:

Then let it go and move on!

BUT… if you decide you need to apologize… let’s move on to the next step:

THREE. Which is to Admit When You’re Wrong

We all make mistakes. We all screw up! We’re all learning as we keep on this journey… right?  So when we make mistakes… and we wind up disappointing someone… we can own it… and admit we’re wrong.  And then ask forgiveness.

We don’t need to try to justify it… and it’s surely best to not pretend it didn’t happen or try to bury it… because we all know that NEVER works… right?  Just rip off the bandaid… own up… and ask for forgiveness.

NOW… at the same time… you may decide:

“Hey… I may have disappointed someone because I’ve chosen to believe something different than them…. or live a different way.”

FOUR. Stop Living Your Life to Please Other People

We can’t please everyone or make everyone happy. And if we try to do that we’re going to wear ourselves out trying.  Right?

That’s why we need to make some decisions around our personal priorities.  The values we’re going to believe in and hold true to.

We can be confident in the things we’re called to do/be AND at the same time be gracious and kind as we interact with others who hold different opinions.

AND… at the same time accept that we may disappoint some people along the way. That’s okay.  It’s going to happen.

If you keep our FIRST TENANT in mind: Love first.  Love last.  Love fully.   You’ll be able to LIVE more FULLY too.

Our last (THIRD) TENANT: To Agree to disagree with honor.

I remember talking with Congressman Ro Khanna on episode 211 of DREAM THINK DO.

It was one of my favorite conversations… not because we agreed on everything.  In some ways… it was richer because we didn’t!

In fact, Congressman Khanna… who represents Silicon Valley in the House of Representatives… went into the conversation knowing we were going to have different viewpoints on political issues… BUT we both also went in being genuinely curious about each other’s stories and perspectives.

So it was truly a fascinating conversation.  And that conversation has continued via email and texts since!

I love what author Marianne Williamson said on this subject,

“A healthy, vital society is not one in which we all agree.

It is one in which those who disagree can

do so with honor and respect for other people’s opinions…

and an appreciation of our shared humanity.”

Now… I know… if we look at our social media feeds… it seems like we’ve moved FAR away from this time of shared humanity.  BUT that’s not what this masterclass of 3 episodes has been about.

From the beginning… we’ve talked about the goal for these three episodes… is to help you to navigate tough… but important discussions.  Real discussions.  Face to face… or at least… zoom to zoom discussions.

Where we look someone in the eye… and… we really listen.

AND if we do these three things AFTER a tough conversation…

TWO: NEVER disrespect but be willing to disappoint.

THREE: Agree to disagree with honor.

If we do these three things… more often… AFTER tough conversations… we’re going to increase our chances of having rich relationships.

Relationships with people who might have vastly different perspectives than our own,  BUT… fun… diverse… honoring and fun relationships… that will last.

And… I also believe… it’s those one-on-one relationships…that will have a ripple effect and start to turn the tide of divisiveness… and lead to more true understanding… connection… and breakthroughs!

Do you agree that having one-on-one conversations… real conversations… can have a ripple effect?  Do you think that having rich… diverse… relationships can help to turn the tide on all the divisiveness that seems to be happening in the world?  I do… and I want to hear from YOU.

Also, I want to hear about your favorite strategies for things you can do AFTER you’ve had a hard conversation.  Comment and let me know.  I can’t wait to hear from YOU!