“Sometimes you have to look ‘Do you want fries with that’ right in the eyes… as you’re going after your big dream.”

21 Sep “Sometimes you have to look ‘Do you want fries with that’ right in the eyes… as you’re going after your big dream.” 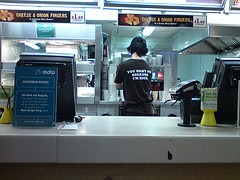 That was a direct quote from a revolutionary I met with yesterday.

This is a person who is going after her big dreams.

And… I’ll say that she is truly on the cusp of some innovations that will blow people away.

She’s an artist and she’s becoming a master of an entirely new craft.

She’s going to amaze and daze the world… and on most days… even though she’s really humble… I think she knows it.

But even she… with all these amazing skills and gifts… has to deal with doubt.

As she was showing me some of her innovations (I’ll be sharing a lot more on this in the future because this artist is helping us with a future project) and my jaw was dropping to the table… she had to admit that she wrestled with visions of crashing and burning.

In the midst of creating this incredible stuff… she had to fight off those voices that were saying “No one will ever pay for that.” Or… “Who do you think you are to try that?” Or… the classic… “You won’t make it and you’ll be stuck making minimum wage at a burger joint!”

Yes… it got that specific for her. And I’ll be the first one to admit that I’ve heard those same voices. How about you?

So… I asked her… how do you break through it?

Her response… “Sometimes you just have to look ‘Do you want fries with that?’ right in the eyes and keep going!”

Yup. You’ve got to push through.

Especially when you’re working on one of your dreams. Maybe it’s late at night or early in the morning. Maybe it’s after a full day of work?

You’re clicking away… things are happening… and then those pangs of doubt start to creep in.

What do you do?

Say a little prayer? Think of a motivational story? Call someone?

Jump in the convo and let us know?