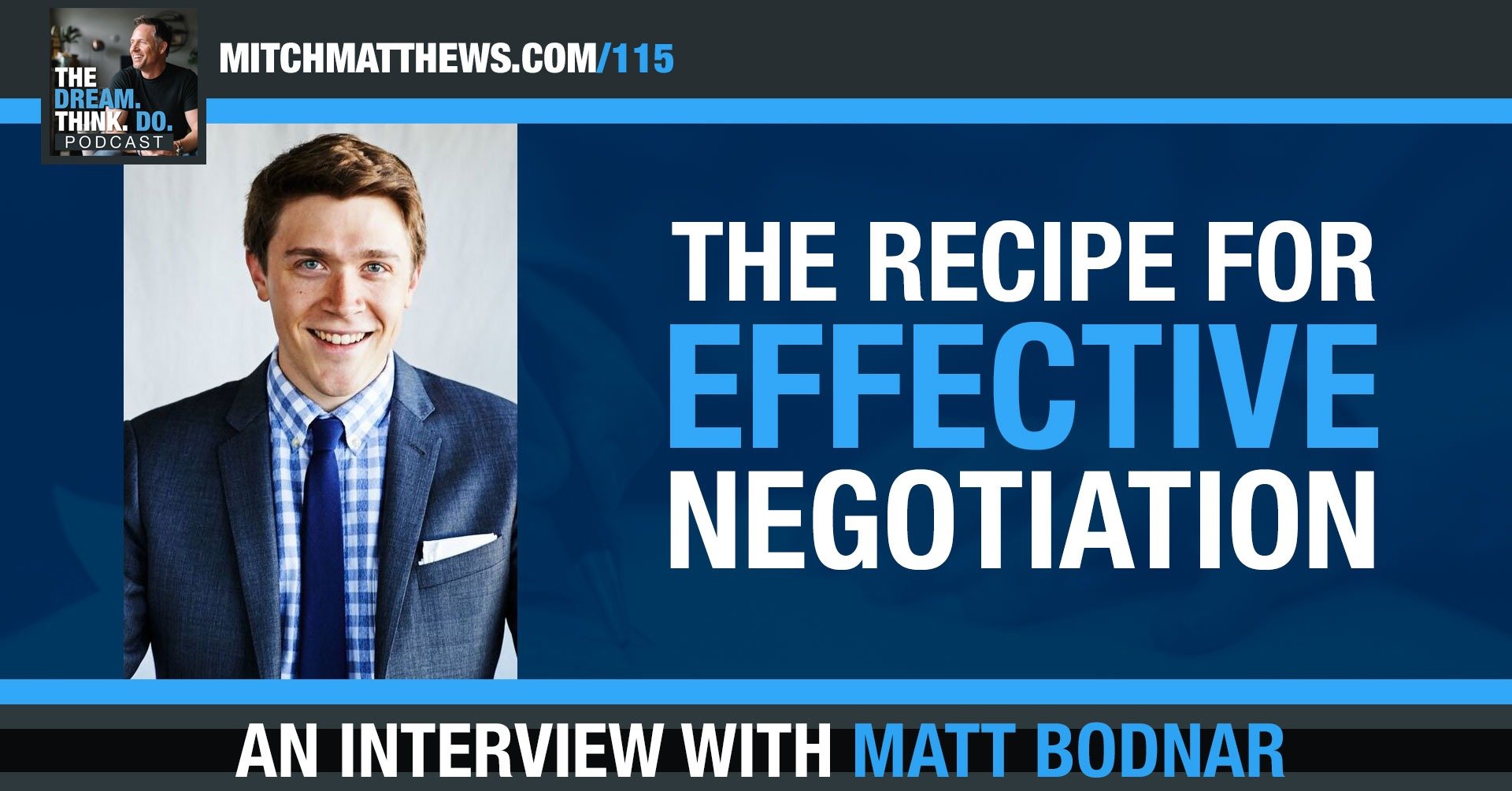 Posted at 05:00h in Dream. Think. Do. by Mitch Matthews 3 Comments
0 Likes
Share

Mitch talks with Matt Bodnar about the fine art of negotiation. Matt is a partner at the investment firm, “Fresh Hospitality.” Bodnar joined them after several years at Goldman Sachs. Since coming on board, Matt has sourced and lead the firm’s investment in several restaurants (100+) and vertical farming startups.

Let’s do some word association.

What do you think of when I say the word, “negotiation”

Many think of words like… pressure, coercion and/or manipulation.

When you talk about negotiating with Matt, he brings up words like curiosity, understanding and win/win.

This approach has made all the difference for Matt.

And… it’s made him very good at the art of negotiation.

So much so that he was named in Forbes’ 30 Under 30 list, and the National Restaurant Association called him a “Rising Restaurateur Star.”

Matt is a partner at the investment firm, “Fresh Hospitality.”  Bodnar joined them after several years at Goldman Sachs. Since coming on board, Matt has sourced and lead the firm’s investment in several restaurants (100+) and vertical farming startups.

He’s also the co-founder of Fresh Capital, which focuses on commercial real estate investing and development for restaurants.

During our conversation, Matt shares his simple, powerful and immediately applicable strategies for negotiation.  You’ll be able to apply these concepts whether you’re putting together a big sale, an important contract… or just trying to navigate next steps with a team member.

Listen in… and learn the recipe of effective negotiation.

Plus, comment below and let us know which concepts stood out to you!  I’d love to hear from you!

Here’s the show notes from this week:

Summary
Nothing much would happen in the world without the art of negotiation. When most people think of negotiation, they think about opposition, coercion, and manipulation. When Matt Bodnar considers negotiation, he thinks about curiosity, understanding, and a win/win. He’s the man to ask, because that’s what he does for a living, and he does it so well.

[13:50] Pre-qualification and why it is important.

[30:35] Curiosity, active listening, and seeking to understand the other party.

[35:36] Parting words of wisdom for someone on the cusp of a big negotiation.

Matt Bodnar: The Art of Negotiation

Bodnar’s Backstory
After several years at Goldman Sachs, Matt Bodnar moved to the investment firm Fresh Hospitality in 2011. Now a partner, he says his focus is on deal-making, structuring transactions, and strategy. He was named in Forbes’ 30 Under 30 list and the National Restaurant Association called him a “Rising Restaurateur Star”. Restaurant Hospitality Magazine tagged him as a “Strategy Pro”. Bodnar is also the co-founder of Fresh Capital, and their focus is commercial real estate investing and development.

Putting the Daily Grind Behind
“I consider myself fundamentally an investor,” says Bodnar, who helps to source and lead investments in restaurants and businesses. What does an average work day look like? It turns out there is no typical work day. Every day can be very different, but most of his activity involves “sourcing new investment opportunities, and meeting new people. We invest across the food value spectrum.” Bodnar explains that in investing, there are two fundamental strategies, discovering value, or adding value. “We like to add value and layering in systems, processes, and strategies that enable the property to scale and grow.” However he describes it, a big part of Bodnar’s success is being a skillful negotiator.

Reflecting on his old life putting in 14-hour days on Wall Street, compared to what he does now, Bodnar says he loves “creating changes that are transforming cities and neighborhoods, as opposed to sitting at my desk and shuffling dollars back and forth on a spreadsheet.”

Negotiation Secrets for Success
His unorthodox approach to negotiation has worked well for Bodnar. “I have some perspectives on what makes negotiation effective that might differ from some people’s. There are different negotiating styles,” explains Bodnar, “and negotiation is not, in my opinion, about hard selling somebody, forcing or manipulating or deceiving someone into agreeing.” Instead, in any negotiation, Bodnar spends about 80% of his time focused on understanding the other party. He wants to know what their goals are, their desires, their best outcomes, what’s in it for them, and what they are looking for. “I see it more as a Venn diagram that overlaps my goals and the other parties. Listening to the other person, it becomes a lot easier to structure a deal, because you can see where things are aligned.”

Preparation Provides Leverage in Negotiations
Once you have mutually aligned principles and overlapping area on the Venn diagram, you move on to preparation. Research out of Harvard reveals that preparation is essential to successful negotiation. Whichever side does more preparation typically achieves more of what they want. Research will give you the all-important unbiased data, which you can use to your advantage. If you’re going out to purchase a car, you want to look online, go to several dealerships, check out different makes, models, and find out the price range. You would use the same method in your job search. Research is critical in salary and other negotiations with your prospective employer. You need facts and figures to bring to the conversation. Data is one form of leverage, as is the willingness to walk away, or cultivate additional options.

“If you go to one company and they give you a job offer, you can take it or leave it,” says Bodnar. “But if you go to 5 companies, you have a lot more choices, and you can use the offers to get a better deal with the company you may really want to go with. Have other options. Use the data to generate leverage.”

Leveraging Is a Key Skill
Leveraging allows you to expand options and possibilities, so it is an invaluable skill. In raising capital, Bodnar suggests talking to 20 or 30 investors, collecting offers and term sheets. You can use them to get the best deal. “One of the other ways to generate leverage, but also build rapport with the person you are negotiating with, is to create an overseeing decision-maker who has the ability to say yes or no to the deal. In a job negotiation, it could be your significant other, or if you’re a CEO, your board of directors.” Blame it on a third party so you are not the bad guy who is bullying them, but have a vague, even fictitious third party, who has ultimate authority over the transaction.  Another application of that same idea is to pencil in an agreement of a term, but give yourself a way out by saying it has to go back to the board. It will give you time to think about it, and the option to come back and let them know that the board would not accept the terms.

Playing Hardball Did Not Come Naturally
“I’m the kind of person who wants everyone to like me, and being able to stonewall people sometimes, say no, or just go silent for weeks at a time to try to generate leverage, wasn’t easy,” confesses Bodnar. “Playing hardball with people when putting a transaction together didn’t come naturally to me. I had to learn that.”

Let Go of People Pleasing
He uses two powerful tools borrowed from The 4 Hour Work Week by Tim Ferriss to overcome the urge to be a people-pleaser. “Two things that stick out the most are: that simplicity requires ruthlessness, and the concept that to make the big awesome things happen in your life, you have to let little bad things happen. You have to break some eggs, piss some people off, so you can dedicate your focus and attention to the things that are going to deliver what you want.”

Parting Words of Wisdom
What parting words of wisdom does Bodnar have for someone on the cusp of a big negotiation? “In Buddhism, they say that suffering is the result of focusing on yourself. Take the focus away from yourself, and focus on what the other party is about and what they are trying to achieve. Not only will you take away the fear and anxiety, but the strategies will naturally materialize out of the building blocks you use in that process.”

Keep in Touch
A personal message from Mitch Matthews: “What were some of the strategies that stood out for you? I would love to hear from you on social media, or email me directly: mitch@mitchmatthews.com. If you enjoyed this information, share it with someone, or share it on the web. Leave a review on iTunes or click on the 5 stars. The more reviews we have, the more people they allow us to reach: iTunes Dream Think Do.”

“Remember to dream bigger, think better, and do more of the freaking cool things you’ve been put on the planet to do. Keep bringing your own personal brand of awesome. The world needs more of it.”