Kelsey Merritt | Getting Clarity on Your Dreams 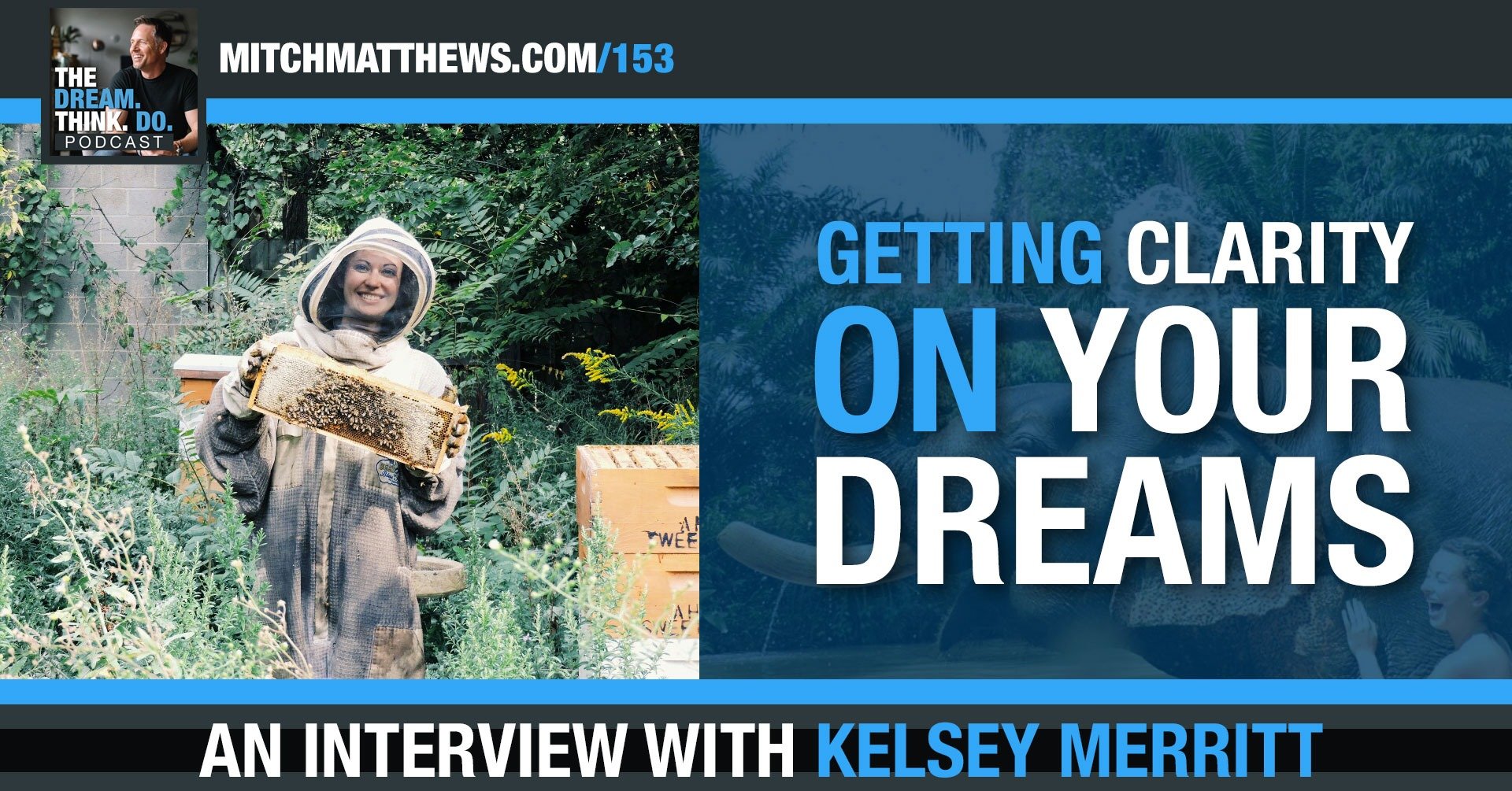 21 Nov Kelsey Merritt | Getting Clarity on Your Dreams

Kelsey Merritt | Getting Clarity on Your Dreams

In this episode, Mitch Matthews interviews Kelsey Merritt. When they first met in 2016, Kelsey impressed Mitch with her list of 300+ things she wanted to do, see or experience in her lifetime. Since then, she’s gone to check many things off her list… including setting a World Record. They talk about the importance of clarifying your goals and dreams as well as dig into practical strategies for achieving them… even when time and budgets are tight.

In 2016, Mitch and his Dream Team met Kelsey Merritt when they brought the BIG Dream Gathering to campus.  She stood out because she brought her Bucket List of 300+ things she wanted to do, see or experience in her lifetime.

Since that time, she’s stayed with it and checked a number of items off the list.

In fact, Mitch and the crew brought the BDG back to Kent State and helped to make another of Kelsey’s goals (involving honey bees) a reality.

Check it out it out below:

In this episode, Mitch and Kelsey talk about how to get clear on your goals and dreams.

Then they dig into practical strategies for making them happen!

Comment below and let us know what you connected with from Kelsey’s story and strategies.

We’d love to hear from you!

Also… here’s a summary of the interview with a few more details too!

Kent State University student Kelsey Merritt met Mitch and the BIG Dream Gathering Team in 2016 and impressed them with her bucket list of about 300 items she wanted to do, see or experience in her lifetime. She’d already checked many items off the list, but she keeps adding items to it. However, this is not a list of mere achievements, it’s a list of experiences. Her focus is to be in the moment and enjoy the process. And she’s not afraid to dream big — one goal she recently went after was to break a world record.

[03:12] Introduction and background of Kelsey Merritt.

[33:45] Challenges in breaking the world record.

Kelsey Merritt, Getting Clarity on Your Dreams

Kelsey Merritt’s list journey started when she was a junior in high school and her English teacher assigned her class the task of creating a bucket list of 25 items, then completing and documenting two of them. Merritt completed her two items and stashed her list away in her room, only to find it the next year. “I pulled it out around the end of senior year when I was cleaning out my room, getting ready for college,” Merritt says. She decided to complete her list. “From there, it exploded into the beast that it is today,” she says.

Although ever-evolving, at the time of this interview, the list has 348 items, 184 of which have been completed.

“It’s important because it’s helped me live my best life,” says Merritt. “I don’t want to go through the motions of life. I want to experience this world as much as possible.”

People are concerned that she won’t finish her list before she dies, but that’s not the point. “I’m not preparing myself to die,” she says. “It’s taking what this world has to offer and just doing it.” People who assume it’s a death preparation are thinking about it backwards. Experience is what gets people talking, because when you start to talk about something you’re passionate about, you light up and your heart starts to sing, and it’s opened up doors for her at career fairs and networking events because of that excitement. “It’s made me who I am today,” Merritt says. “It’s pushed me out of my comfort zone. It’s taught me a lot about life, living, who I want in my life. It’s an incredible journey.”

Recently, Merritt was able to check off extracting honey from a beehive from her list. She was genuinely curious and couldn’t stop herself from asking the beekeeper a thousand questions. It’s always been that way for her. “I’m curious because I think that’s where you learn,” she says. If we just do what we’re supposed to do and go through the expected motions of life, we’re not going to learn. “We’re not going to learn anything about society and about each other and how to survive this crazy thing called life.”

Merritt has accepted that she will fail. A lot of her items require a professional or someone who knows what they are doing. Not being a professional, she’s prepared to fail every single day. “I’m not afraid to fail,” she says. “You’ve just got to roll with the punches.”

Not fearing failure allows her to hold herself to a higher standard than simply checking items off a list. She’s there for the experience. When she went rock climbing outside for the first time, she made it up two walls but failed to make it up the third, harder wall. She failed hard in her mind. A couple weeks later, she and some friends went to Red River Gorge, where she completed an 80-foot wall. “I made it up there. It took me a solid hour, and I kept wanting to give up,” she says. However, she wanted that experience and she was going to get it. She broke the wall into sections and went up section by section in a deliberate, mindful manner. “I like to be very mindful because when you are, failure isn’t an option,” Merritt says. “I’m going to do this. There’s no reason why I can’t do it. There is nothing holding me back, it’s just me and this task at this point.” Once you get into that mindset, Merritt believes you can do anything.

Failure is also a way of pointing you in the right direction. Look at things from another angle, research more, reach out to others who have done it, work harder, and figure out the way to do what you want to do.

Going After a World Record

One of her list items was breaking the world record for the largest mural painted with bare feet. To qualify for the Guinness Book of World Records, the mural had to reach a certain threshold of creativity and use more than two colors of commercial paint. The fabric pieces also had to be attached together so that there were no gaps in the image. She used 176 32-oz jars of paint in five different colors, and 124 bolts of muslin fabric, with each bolt containing 10×2½ yards of material. “The final measurement was 26,787 square feet,” says Merritt.

The mural was done by having people dip their feet in the paint and then walk over that paint’s corresponding areas. She used landscape staples to put the material in the ground, then stitched the pieces together with staples and tape at the edges. An estimated 800-1,000 people helped with the project.

The final image was all of the Olympic ring colors, and it represents every single country in the world. Across the top, it said “We Are One.” “I think that just embodies the whole thing,” says Merritt. “I wanted to flood the media with something positive, something exciting, get people inspired and involved.” There is a lot of negativity in the news. A lot of people are facing despair at what is happening in the world. “I wanted to show that no matter what’s going on in the world, we can come together.”

The record-breaking attempt was not without challenges. Most notably, Merritt’s own body turned against her. “I have eye ulcers,” she says. When her eye gets dry, her eyelid sticks to her pupil, and when she blinks, it rips the tissue off her pupil, basically creating a rug burn on her eye. She woke up the morning of the project, Friday the 13th of October, with her eye in such immense pain that she could barely get out of bed.

Merritt started her day at 7 am, by 9 am she was on the field ready to paint the mural and put it together, and by about 3:30 pm she was in such pain that she couldn’t function. “I just felt failure hit me head on more than anything,” she says. But then she turned to look at the mural, and saw that only one half of one column was left to do. Her friends, family, and complete strangers who barely knew each other’s names had come together to make this happen. “We finished the mural, and it was beautiful,” she says. She had wanted to run the show, but she had to give up control. “Once I let it go and let people complete this mural, there was no better way for the record to be completed,” says Merritt.

They beat the record by over a thousand square feet.

Wisdom of the Week

It’s not safe to dream. It’s risky. Your dreams may not line up with what other people expect you to do. You’re going to fail. “Failure is not something to be afraid of,” says Merritt. It’s just a way of showing you another way to reach your dreams. “There’s a reason and a purpose for everything, and I think failure is a part of that and a part of that learning process,” she says. So go after those dreams. Take those risks. Don’t take no for an answer, but instead find the way to make your dreams happen. “This is living your best life,” says Merritt. “This is not preparing to die by writing a bucket list, it is living your best life, and that’s the best, most beautiful thing there is in the world.”