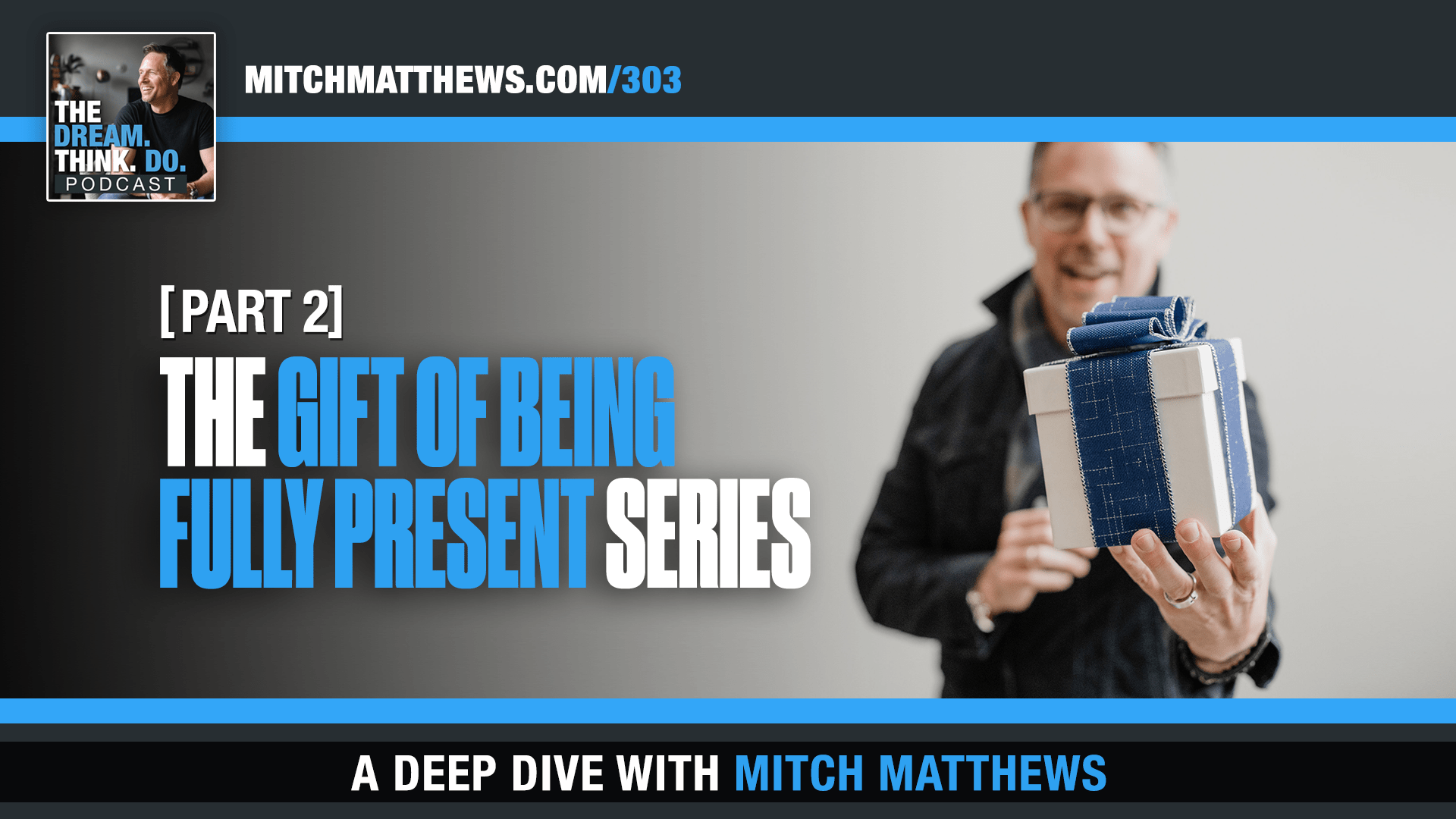 Welcome to episode 303… and specifically… part two in our brand new series called “The gift of being fully present.” This series is specifically designed to help you to live more fully in the PRESENT.  Because if we can fully live in the moment more often… THEN… we can soak up more of the good stuff.  AND bring more of the good stuff into the world too.  That means loving well… bringing excellence… and having more fun… even in 2020!  It means taking action when and where we need to AND it also means resting… actually resting… and finding a sense of peace… once in a while too!  I know… I know… it’s a big task… especially with the goal of keeping these episodes to under 15 minutes… but I think we’re up for the task.  So… let’s get to this!

MORE ABOUT THE EPISODE: (The Transcript)

That was catching yourself sometimes and asking the question,

What am I doing… right now?

And then to take a deep breath as you do.

It’s a simple 2-step exercise… but I know it’s been a bit of a game-changer for me.  How about you?  How did it go?

Did you find yourself using the question to edge yourself back… ever so slightly… to the here and now?  I heard from some of you.

In fact, long-time Canadian DREAM THINK DOer “Cathy B” let me know that when she was feeling on the verge of distraction and overwhelm… she used the exercise.  One specific example she offered was… when it helped her to feel grateful for an email she’d just received from her daughter.  It was a simple email… but it was about something Cathy‘s been dreaming about and working on for a while.  She said the exercise of just pausing… and taking a deep breath… and coming back the moment…   during such a simple thing as reading an email…

The question… and the deep breath… helped her to truly take in that moment and appreciate the email… and the effort that her daughter took to write it.  She said it really warmed her heart… and made that moment even more special.  She didn’t miss it.

How cool is that?  Let me know how it went for you!  I want to hear from you.

Okay… well… with THIS episode, I also promised to do three things:

SOME BRAIN SCIENCE TO LIVE MORE IN THE PRESENT:

Okay… so you guys know I’m fascinated with the brain.

I was a solid C+ science student in high school and college… but since then… I’ve just fallen in love with studying how our brain works… and how… if we understand those things… we can do things to dream bigger… think better and do more of what we were put on the planet to do.

BUT since we’re keeping things short and I want to get right to something that’s going to help you immediately… I want to really key in on TWO main areas of the brain.

THE TWO PARTS WE’RE GOING TO TALK ABOUT TODAY ARE:

The basal ganglia and the prefrontal cortex.

Now… if you’re a big fan of talking about the brain… give me a fist pump in the air and say… “I’m all in.”

BUT if you’re not… hang with me because we’re going to explain things in a way where it will help you to be more present… AND you’ll be able to impress your friends at your next Zoom dinner party!

It’s what I call the brain’s “Project Manager.”

It’s the part of our brain that is constantly looking for patterns… systems… subconscious checklists… and you guessed it… habits.

It’s primary job is to try to figure out ways of doing things… so the brain doesn’t have to work as much.

Just like a good project manager, it loves to tell the rest of the brain, “Hey… relax… just do your thing.  I’ve got this!”

For example… the basal ganglia is the part of your brain that allows you to hop in your car and drive to the store… BUT when you pull into the store’s parking lot… you catch yourself thinking, “Wow.  I remember leaving my driveway… but I couldn’t tell you one other thing about that drive!”

I bet you know EXACTLY what I’m talking about… but here’s something you can do for fun… to really experience the full power of YOUR basal ganglia.

When you go to do your bedtime routine tonight…  brush your teeth with the opposite hand you normally use.

Seriously… your BG will try to wrestle you to the ground because it’s saying, “BUT WAIT… THAT’S NOT HOW WE DO THINGS!!!”

Or… as you drive to the store next time… take a street you NEVER take.

Yes… it might add a total of 2 minutes to the trip… but do it.

YOUR inner-project manager will revolt… BUT this kind of exercise is REALLY good for you so you can feel your Basal Ganglia in action.

But this type of experiment is also really good because it REALLY helps to wake up the second part of the brain we’re going to talk about next.

And THAT is the PREFRONTAL CORTEX.

The Brain’s PFC is the brain’s BIG BOSS.

It’s designed to override a lot of the systems in the brain.

BUT like a good boss… in order to work it’s magic… it has to be engaged.

The basal ganglia is constantly looking for ways to say to the boss, “Don’t worry about a thing!  I’ve got a system for that.”

Or… “Work on other stuff, I’ve got a process for that.”

Don’t get me wrong… the basal ganglia doesn’t have bad intentions.

HOWEVER… it’s just NOT always a good judge over whether those systems work.

As you’ve probably seen in documentaries like “The Social Dilemma” or TED talks about how things like social media… or even… email can make our brains explode with dopamine and serotonin because of the sense of feedback… variety… and novelty.

Now, we’re not going to get into whether all of that is inherently good or bad… in THIS episode… but when you think about the little bit that we’ve talked about already… you can imagine that if the basal ganglia has figured out that IF we start to feel anxious, overwhelmed and / or uncomfortable… which is kind of the 2020 trifecta… it makes sense that the basal ganglia would say, “Don’t worry about it!  I’ve got something that will make things better.”

And then move you to a “distraction habit.”

Because… it’s learned… when we move into the “distraction habit” of grabbing your phone… your brain receives a burst of dopamine and serotonin.

And just like how you get lost in thought on your drive to the store… and you wind up driving into that parking lot thinking, “How the heck did I get HERE???”

Maybe you’ve had the same experience where you’ve just found your phone in your hand… and your thumb is scrolling… and you find yourself saying, “I don’t even remember taking this thing out of my pocket.”

Or… “How long have I been doing this?”

I won’t say who… but someone recently totally confessed that they thought they had a toilet ring permanently tattooed to their butt… because they’d gotten so caught up in social… while “taking a break,” they spent an hour in the bathroom… and could barely walk when they went to stand up.  I know… nasty.  LOL.  BUT maybe you can identify!

So here’s the thing.

The basal ganglia is neither good nor bad inherently… BUT it is a creature of habit.  Actually, it’s a CREATOR of habit.

So we need to be intentional about the habits we’re walking out.

The good news is that the prefrontal cortex can TOTALLY override the basal ganglia… and one of the best ways to do that is through a good question.  Because a question engages the Prefrontal Cortex… it brings it into the mix.  It steps in and says, “Wait… what are we doing?  And… just as importantly… WHY are we doing it?

Makes sense… right?  And that’s exactly why we experimented with our first question last week!  And why we’re going to introduce a NEW question this week.

So… our question for this week is:

Oh… You can still take that deep breath after asking it… and that’s good!

But with this question… I want you to take an action that helps your body to get on board.  Move in some way.

Raise a fist pump in the air.

Take some action… big or small.

If you’ve ever heard Tony Robbins talk about this kind of movement… you could say that this kind of thing would allow to have a “STATE CHANGE.”

By the way… if you want to learn more about this and the science behind how THIS type of thing works… check out episode 246 called “2 minutes to confidence.   mitchmatthews.com/246

It will make a difference.

So here’s the specific experiment for this week.

If you feel distracted or you want to feel more in the moment:

Ask yourself what YOU ACTUALLY want to be doing.

I’ll say I used this just this past weekend.

I had a lot of stuff I could be working on… and I was starting to go there as I was at the dinner table with my family.  I started to drift to all the stuff I COULD be doing or I SHOULD be doing… but I asked the question,

And it brought me back to an amazing conversation about how The Madolorian is one of the best… if not the best TV show of all time.

I didn’t miss the moment… and I’m soooo grateful.

And that’s what I want for YOU too… THIS WEEK!!!

“Wherever you are, be ALL there.”

And just see what it does for you.

It may not be easy.

Heck… your basal ganglia may resist it at first.

BUT… as you do it… your basal ganglia will start to come around and start to set up NEW patterns and sequences.

So being IN the moment… and being more present… becomes your NEW go-to habit too!

Give it a try and let me know how it goes.

Let me know how the experiments are going for YOU!  Leave a comment about something that’s worked for you or let me know where and how you’ve experimented with the questions.  I can’t wait to hear from YOU!!!

Until next time… keep bringing your awesome!!!